What's In Store for Season 4 of Drop Dead Diva? 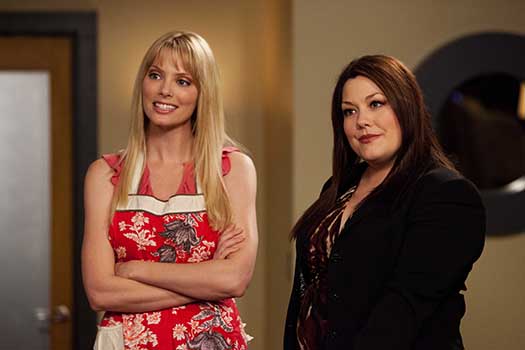 Season 4 of Drop Dead Diva starts Sunday night and it promises to be a good one for all those DDD fans like us out there. When we last saw Jane, she found out that her best friend, Stacy, had kissed the man of her dreams, Grayson, and so she went off with Owen to Italy. And Jane’s guardian angel Fred, who was dating Stacy, also found out about the dreaded kiss and left her for good. All of the relationships hung in the balance as the season ended. We spoke with executive producer Josh Berman and stars Brooke Elliott (Jane) and April Bowlby (Stacy) about what lies ahead in Season 4.

Josh warned viewers, “If there’s a show not to be missed it’s this one. The season premiere not only answers the cliffhanger from the end of last season, but sets up a great journey for our characters for the summer.”

Brooke filled us in on where Jane’s head is at. “Her love life is going to be such a rollercoaster this season. I’m actually really excited to hear what the fans think about it. She’s with Owen… and that relationship does blossom and move forward. Yet there’s Grayson and he keeps popping in every once in a while. Grayson’s feelings actually start to change a little bit. He starts to entice Jane and while Jane doesn’t really see that at first, she obviously always notices Grayson… She’s always torn because she really does love Owen but Grayson’s always in the back of her heart.”

Josh chimed in about working with the actor who plays Owen, Lex Medlin, and how he has helped Jane evolve. “Originally we brought Lex in for just a couple of episodes and we all fell in love with him and then made him a series regular this year. He has allowed us to take Jane’s character in another direction. I think the Jane of Season 1 would not have seen herself falling in love with anybody else, let alone Owen because she is Deb and she was so in love with Grayson. And the fact that after three years, her character has grown so much that she opened her heart to love somebody other than Grayson has been a joy to write but, also messy, which as a writer and as an actor it’s kind of a fun place to be.”

Josh pointed out that this change is a theme for all of the main characters moving forward. “This season is about, for all of our characters, growth and confidence. For Jane, she really grows emotionally. She makes some very clear decisions about her romantic life that propelled the character forward. And of course, like any good drama, two steps forward, one step back and she may be questioning her decisions as well but there’s a real emotional maturity that comes to Deb when she realizes she’s moving on. She’s leaving behind some of her preconceived notions of what her life may have been but she’s finding just as much joy in what her life is becoming.”


As for how things stand between best friends Jane and Stacy, Brooke admitted, “That’s a little tricky for a little while. It’s a little rocky. There’s some pretty gnarly fight scenes in the first couple of episodes but, like all good girlfriends, we figure out a way to smooth it out.”

Josh also revealed some big changes for Stacy this season. To begin with Fred, played by Ben Feldman, will be returning despite his recent role on Mad Men. Josh stated, “We miss Ben but you haven’t seen the last of him on our show.” But it seems as though after the kiss between Stacy and Grayson, Fred does move on and so does Stacy.

April revealed, “There’s a lot that happens in Season 4, episode one with my storyline. A lot is covered and Fred and Stacy have it out. You will be surprised how it works out and miss him a lot.”

Josh jumped in to deliver some of the details, “The whole Stacy/Fred relationship has been building to the season premiere and in every way the relationship comes to a head. And if you are a Stacy/Fred fan, you don’t want to miss this episode. It’s the first time that I’ve ever seen an editor get emotional while showing me a cut while watching a scene between Fred and Stacy… We really, really honor the people that have been invested in that relationship.”

He also noted some other changes for Stacy in the months ahead. “[She] thought that the ultimate success in life was to be an actress and a model. But after three years, she’s realized that there’s a lot more to life than being the pretty face. And I am just so excited to tell her story. Stacy’s character uses her brains to achieve a new level of success and starting her own business. And telling that kind of story is what makes a show in its fourth season so rewarding.”

He added, “Right now coming off of such a bad recession in our country where so many people lost their job and so many people are reinventing themselves, for me it’s really fun to use Stacy as the character who reinvents herself, economically, on the show.”

For related stories check out:
Clay Aiken Drops by Diva for a Cause