Cybill Shepherd on The Client List and Her Passions 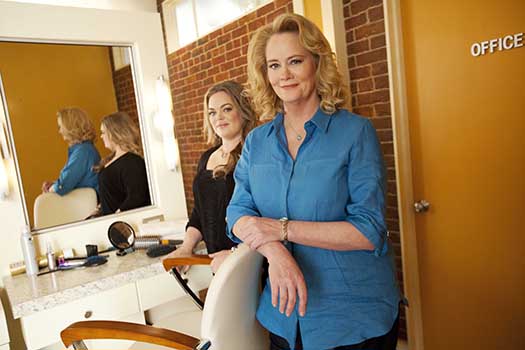 Cybill Shepherd is back on TV playing Jennifer Love Hewitt’s mother, Linette, in the Lifetime drama The Client List. She originally created the role for a Lifetime movie that aired in 2010 and signed on for the series in 2012. The season finale will air on June 17, but the show will return in 2013 for season two. In a recent conference call interview Cybill talked about the series, her character and her passions.

On The Client List
“It’s just a fantastic concept, and it’s really about how difficult it is right now for women, especially if you’re a mother, to try to support yourself. These are very hard times. There’s not a lot of jobs out there, a lot of men losing jobs, a lot of women losing jobs. It’s a story about how women struggle to survive.”

On Her Character Linette
“Linette has survived a lot. She has a great line in the first season when Riley, Jennifer’s character, says, ‘How did you get through being a single mom?’ And I said, ‘With Chardonnay and a prayer.’ So she loves her wine. She’s a Texas woman. She’s what I would call an iron butterfly, like Lady Bird Johnson. You could also refer to her as kind of a steel-magnolia southern woman. I’m from Tennessee, so I’ve done so much work set in Texas that I feel like I’m from there, too. We seem very feminine. We are very feminine, but underneath that, we are strong, strong. We may have big hair. In Texas, the bigger the hair, the closer to God.”

On How Much of Cybill Is In Linette
“I always like to bring a lot of myself to whatever I’m doing, but certainly one of the things I love about playing Linette is I get to do really both sides of the coin, so to speak — be comic relief but then do the dramatic thing. There’s a particular relationship between a mother and her only child, that’s a very, very special relationship sometimes. My character may get a little too involved, as mothers sometimes do, not me, of course, I’m the perfect mother, right? I think that ups the ante and makes it fun to play as well.”

On Aging
“One of the most difficult things for women as we age is the fact of learning to love ourselves past a certain age because most of the time we get really down on ourselves because we’re changing. But we still have the opportunity to grow and to keep your eye on the prize, to remember that beauty is what you do in life. It’s not how you look. And learning to love our bodies as we age, especially for women, is a challenge that we have to meet and make — in other words, don’t fight getting older, because we’re all going to get older. The alternative is not to be around.”

On Her Passions
“We all want passion. We all want love. And we all want a way to give back. And I think right now is a time in this country where we’ve got some really strong issues that need to be addressed. One is pro-choice and birth control, and I’ve led marches on Washington, hope I’ll be leading another one — also gay and lesbian rights, marriage equality. This is kind of political, but I’ve been this way my whole career that I think it’s very important for us to speak up about what we believe in and support that and support women.”

On What She Does for Fun
“I love to ride bikes. I love to swim and walk. I’m 62, so one of things you learn as you grow older I’m not going to be running a marathon. I’m not going to push myself too much. I just want to enjoy life, because you get to a certain age — like 62 as I am — and you know that you don’t have forever and I want to have that time to be with the people I love.  And the other thing that’s really important for all of us to remember — and I think especially women — is to indulge ourselves. It doesn’t have to be a big thing, just a little something just for yourself. Just remember that you need to reward yourself. Doesn’t have to cost a lot of money, but your me time or whatever it is.”

Watch the season finale of The Client List on Sunday, June 17 at 10 p.m. EST/9 p.m. Central on Lifetime.


Jennifer Love Hewitt Hopes to Empower with The Client List


Amanda de Cadenet on The Conversation and Motherhood