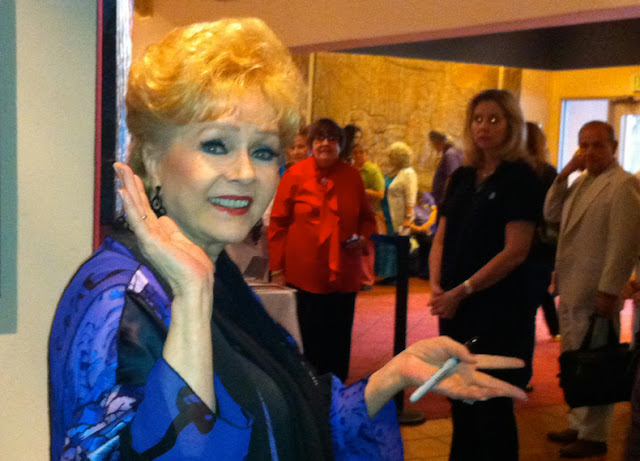 Not only is Debbie Reynolds a film icon, she’s quite the historian as well. Over the years, the star of Singing in the Rain amassed an unparalleled collection of Hollywood memorabilia. Originally she had hoped to open her own museum but unfortunately that dream never became a reality.

So last year, Debbie auctioned off a portion of her assemblage. In the event’s catalog, she explained how her obsession started. “My love for collecting began early in my MGM career. I used to spend my spare time in the wardrobe department, watching the most talented people create costumes for the actors. I was fascinated by how they were able to translate a simple suggestion in a script, sometimes even a piece of dialogue, into a magnificent costume. I loved everything that went into the process – the sketches, the fabrics, the construction.”

For her part, Debbie seemed to have preserved almost every important film costume imaginable. These included Rudolph Valentino’s matador suit from Blood and Sand, Marilyn Monroe’s white dress from The Seven Year Itch

and Judy Garland’s ruby slippers from The Wizard of Oz

She may have sold some of these famous items, but Debbie hasn’t stopped honoring the history of Hollywood. Inspired by some of the pieces in her collection, the blog on her website, which is managed by Bradley Russell, spotlights articles that cover silver screen performers, characters, costume choices and much, much more.

Kirsten Anderson, who writes the articles on Debbie’s behalf explained how the blog came about. “We want to use the items that were a part of the Debbie Reynolds Collection to bring back memories of the classic movies that so many of us still love.”

In order to do that the blog, which launched this past April, features “lots of great Hollywood stories and gorgeous pictures.” Kristen revealed the ultimate goal, “I hope people who are already fans of films of the era will discover something they didn't already know, and that those who are new to classic film will see something that makes them want to learn more.”

As for her personal motivation for writing the articles, Kristen remarked, “When I was growing up we only had one TV. My mom liked to watch old movies so by the time I was seven or eight, black and white movies with crackly sound and static cameras seemed normal to me. I've always liked the story behind the story, so as soon as I could read I started going through every book I could find on film history or biographies of actors. Now I have a memory full of things like who was the top costume designer at each studio, why Douglas Shearer is credited on all MGM sound films, what shoe size Carole Lombard wore, and where Mildred Pierce was filmed. Yet ask me what I did yesterday and I'll probably stare at you blankly for a while.”

See for yourself at www.debbiereynolds.com/blog.