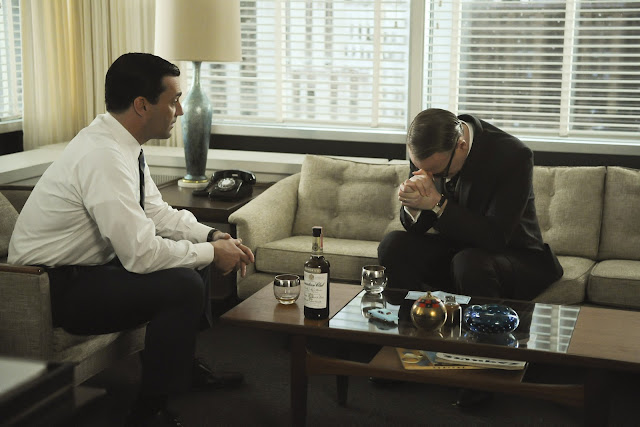 Here's Part II of our interview with Jared Harris from Mad Men on the demise of Lane Pryce.


Jared had so many great insights and stories, we broke the article into two parts. Click here to read Part I.

On Lane’s Final Scene with Don Draper
“That was interesting for me because when I read what my reaction would be I saw that Lane wasn't taking advantage of certain opportunities in that scene. That seemed to me to be those opening doors there. And that, of course, was part of Matt's strategy in terms of how he writes the scene. As an audience member you can see there's better answers that he could give and there's better opportunities. There's ways that maybe he could talk his way around this.

“And the tactics and the change of emotions and everything, it's interesting when you're constructing a scene like that from a performance point of view, is you want to try and arrive in as different a state as possible.

“So that was the idea behind the 4As thing. He had some false modesty about, ‘I hope that's not a problem.’ And then, of course, it turns into a completely different situation and then the fact that he's going to try and bluff his way out of it and lie about it.

“And then eventually I don't think he thought that he would get fired over it. I think that he thought that maybe if he had been called into Bert's office it would have been different. But the fact that it was Don, he thought maybe he could get away with it… I think ultimately his plan had been he was just going to get hold of that check and just rip it up and make it disappear when it came back from the bank.”

On His Failed Attempt in the Jaguar
“Once he sees the Jaguar I think he gets the idea at that point there's a sense of irony of it that he decides to do it in there.”

On His Favorite Lane Pryce Moment
“The Jaguar not starting. I laughed my ass off when [Matt] told me the Jaguar wasn't going to start. I just fell off the chair laughing.”

On Lane’s Choice To End It All in the SCDP Offices
“It was vindictive. He was angry and it was an expression of his anger. It was a passive-aggressive act. His choice of doing it there was a f#*k you to the office, to the people who work there, particularly to Don. And the passive side of that was in the brilliantly placed suicide note, which explains nothing.

“So he's trying to dig a hole for the people, particularly Don, to make them feel bad about what he's done. It was a cowardly thing to do. He did it to try and hurt them the way that he feels that they've hurt him.”

On Shooting the Final Scene
“The thing is there's so little time to shoot. The hardest thing was for me. I just kept on wanting to break into a Monty Python song “Always Look on the Bright Side of Life” while I was hanging there and start dancing. But we put them off because they were trying to [access] their reaction, in a genuine way. And you just don't help really. You just make it more difficult for them… And there's no time. We shot maybe two takes or three takes and you've got to move on. It was pretty somber I'd say. The atmosphere was pretty somber.”