Danny Masterson Returns to the Small Screen in Men at Work 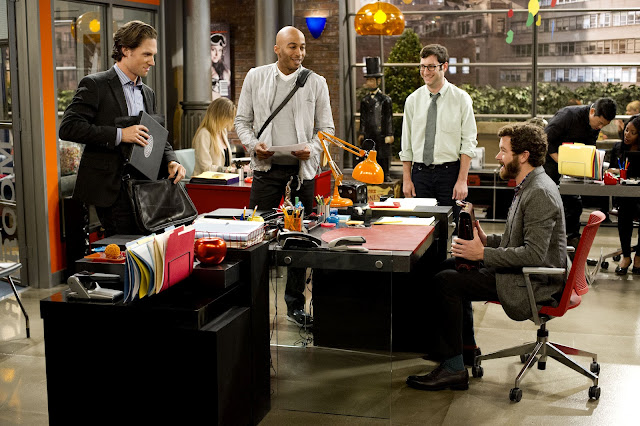 It's been six years since Danny Masterson ended his eight-season run as Steve Hyde on That '70s Show — the series that made household names of him, Ashton Kutcher and Mila Kunis. And now he's returned to primetime on the TBS sitcom Men at Work. In a recent conference call interview he explained what drew him back to the small screen.

Danny stars as the recently jilted Milo on Men at Work. As he struggles with the end of his relationship, he seeks solace in his office-mates and best friends — Tyler the sophisticated writer (Michael Cassidy), Gibbs the player (James Lesure) and Neal the monogamist ('Adam Busch). But unfortunately for Milo, his pals are a little to self-absorbed to really focus on the minutia of his troubled love life.

The humor on the show comes from the relationship among the four lead characters and the chemistry that those actors bring to the screen. Danny was drawn to the dynamics of the characters on the office-place comedy. He noted, "The fact there was only four guys, I do like the ensemble thing, as opposed to my last show we had like eight to 12 regulars depending on the episode."

And he was happy to have the chance to portray a different type of personality on TV. He conceded, "The character of Milo was a 100% opposite turn from playing Steven Hyde for so long. So this guy’s a little bit more of a sensitive type whereas Hyde was the opposite of that."

But Danny explained that a big part of the appeal of Men at Work, was getting to work with actor Breckin Meyer, who created the series and acts as one of its executive producers. Danny remarked, "I’ve known Breckin since I was a teenager… We were two guys who would sit in the same audition rooms auditioning for the same stuff together.”

He continued, “Now all of a sudden him being my 'boss' was something that is really fun to do as an actor. When you have another actor as your boss… they understand how to communicate easier sometimes than just a writer. So that was probably the first thing was Breckin."

He talked about working with the Franklin and Bash star in this different capacity. Danny joked, "Basically he just cracks the whips." But then he quickly took the opportunity to praise the showrunner saying, "No, if you know Breckin you know he’s one of the more intelligent people I’ve ever met. He’s an incredible writer having been writing on 'Robot Chicken' for the last six, eight years. He is the wittiest person I know. He has the fastest comebacks. His sarcasm is legendary."

Danny seems to be enjoying bringing that sensibility to the small screen. He admitted, "I’m kind of playing a version of him on the show. And so it’s pretty nice to be able to go, 'Hey man, what do you want me to do with this line or where is this joke going? Or I don’t understand this reference because it’s some nerd thing that he is a big fan of."

Besides, it's nice to have a boss who understands what it's like to walk in your shoes. Danny acknowledged that he'll seek advice from Breckin, "Every once in a while, [I'll say], 'Give me a line read. Tell me how this is said in your mind.' And him being such a good actor, he can just do it. And you’re like, 'Oh you meant it like that. Cool. No problem.’ And I can go out and perform it."