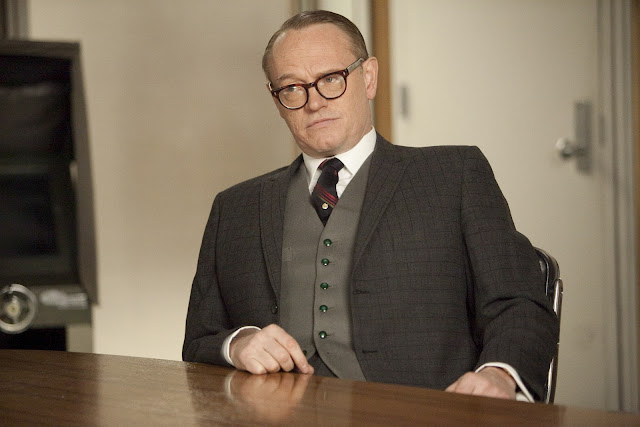 
We put a lot of pressure on Mad Men to live up to the expectations we’ve developed for it over the years. Frankly, it hasn’t exactly been measuring up for us this season — until the last two episodes. Peggy’s dramatic exit from Sterling Cooper Draper Pryce matched the emotion of the greatest Mad Men episode of all time, Season 4’s “The Suitcase.”

But it was this week’s installment, “Commissions and Fees” that surpassed all showings that came before it. Lane Pryce’s demise served up that perfect Mad Men mix of anger, frustration, pity, humor and tears that we’ve grown to love.

The day after the episode aired we got to speak with Jared Harris, the actor who brilliantly portrayed Lane. He talked not only about how he found out he’d be leaving the show, but the path to his character’s downfall.

Jared had so many great insights and stories, we broke the article into two parts. Click here to read Part II.

On Being Told Lane Pryce Was on His Way Out
“[Matt] told me after the read-through for Episode 10. After the read-throughs every episode he asks everyone to hang around so that he can speak to you and give you notes because he's going to be working while shooting. He doesn't always get down to the set.

“I could see he was leaving me for the last person. And then he said, ‘Let's go up to my office,’ which I knew wasn't a good sign. And then he offered me incredibly expensive brandy and then I was like I knew this wasn't going to go well.

“But he explained why he wanted to do it. And he's really been building up to it for the season. And I could see, from an acting point of view, it was to my benefit to go out with a bang rather than a whimper.

“At the same time I know that Mad Men is just getting bigger and bigger as it builds towards Season 7. There's already an obsession with the episode of Season 7. And I'm sad that I won't be a part of that of that build of the show.

“But then again I joined late. So there's no reason why I should be. I'm very, very lucky to have been a part of it.”

On Keeping the Secret
“I couldn't tell my agent. I couldn't tell my manager. I didn't take part in the pilot season this year because I knew that, if I signed on to a new show, people would know something had happened. And it was to my interest to keep it as big a surprise as possible.

“And Matt was very kind to me in that he allowed me to go off and shoot the Spielberg movie whilst I was shooting these episodes. They arranged the schedule for me so that I could go and shoot Lincoln. So one feels there's a generosity that they expected towards me. And I felt, ‘Well then in that case let's make sure that this is as big a surprise as possible. And now I wanted to avoid looking for a… job until after it's come out if you like.”

On An Early Nod to Lane’s Death
“If you go back there's a line in the second hour of the first episode of Season 5 where he's on the phone with Dolores trying to persuade her to come over to the office to pick up the wallet. And when she says she might drop by he says, ‘Well, you know, I'll be here the rest of my life. So yes, it was sort of laid in there early.”

On Whether or Not Lane Had Contemplated Suicide Before
“I've related being a fairly thorough man. And that was in the idea that he goes off and he gets all the supplies that he needs from the hardware. And he's certainly thought about it fairly thoroughly from that point.

“But has he thought about it before? I don't think ever really practically. Maybe in moments of depression we all as human beings sit there and think about, when things are really, really s#*t you think about maybe it'll be easier just to not feel this anymore. That's part of the reason why people get so s#*t-faced drunk, is to numb their feelings.

“So I don't know if that sort of level of planning ever happened before. I'm sure he would have felt that bad that he wished he didn't feel that bad before.”

On the Timing of Lane’s Exit
“Do I think that it happened too quick? No. Would I like to still be working on the show? Of course, I love being there. What a great place to work and fantastic people to work with. But I appreciate that they used it as part of the momentum to build towards the end of the season. So I don't feel like it happened too quick from a dramatic point of view.

“Also those sorts of things you've got to sit on and figure out well how long can you string that out before people get wind of what it is. It still ended up being a surprise. People were caught by surprise. So that means it was a success.”

On Rumors of Lane’s Demise
“John Slattery normally finds out before anybody else because he knows where the scripts are hidden. And so there's a little game that we go on at craft services. He'd go, ‘Hey Jared I hear you've… Hey, I read the outline for episode 12.’

“I mess with him a bit. But eventually people would find out earlier than we start shooting and they put their arm around you and say, ‘Going to miss you,’ and stuff like that."