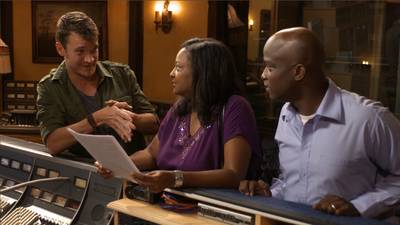 Photo Courtesy of OWN

It’s no secret that we’re big fans of musicals. We were thrilled by the announcement that OWN had a new show called Real Life: The Musical on which regular folks stage elaborate, flash-mob style song-and-dance numbers for a loved one. And our excitement grew when we were offered the chance to talk to Real Life’s host Tom Lowe of West End fame.

He described the series to us, “The show is a very upbeat, singing-based reality TV show. It’s a non-competitive show, so we take a different ordinary person every week and we make their dreams come true by staging a song-and-dance routine to surprise somebody they love. We give them five days to learn a routine. Then we surprise somebody that they want to deliver a particular message to — whether it be a marriage proposal or asking them if they want to go out on a date or an apology or some sort of message of gratitude. And we do an ambush, flash mob, surprise musical performance, with professional back up dancers and a big production.”

Sign us up. What could be better than that? Well throw in some really heartwarming stories, of course. Tom’s favorite from the season involves a young man who just had a heart transplant. He wanted to honor the four UCLA doctors who saved his life. And what better way to do that than with a production number. Tom stated, “It was really amazing to be part of that message saying thank you and expressing gratitude for saving somebody’s life.”

This particular episode also struck a nerve with Tom. When we asked him if he could stage a musical number for someone special he replied, “I would sing a song to say thank you to my mom. I was very sick about 11 years ago and she took time off work and she looked after me full-time and was largely responsible for my recovery. I’ve never really sat down with her and told her how grateful I am because she literally saved my life, too. So I would find some way of singing a song and telling her how grateful I am for that.” Sounds like a very special episode of Real Life: The Musical for Season 2, if you ask us.

Tom talked about why he thinks people can turn to song as a way of expression in situations where communications is sometimes difficult. He noted, “First of all, it makes a bigger statement. If somebody that you love sees that you’ve gone through the effort of learning something and putting on a big production number for them, it’s more special.”

He continued, “And there’s something about music and song that somehow reaches into the true heart of a person, of the soul. Music can really touch you in ways that words can’t. If you can combine a particular message that was written by a lyricist of a classic song… with a beautiful melody and then you see your loved one performing it, it can be a really special or moving experience.”

This is perhaps why music has always been his passion. But doing Real Life: The Musical opened his eyes to another new love. “That’s the funny thing about doing the show because I’ve always been a singer. My job has been to be on stage and perform. So this was really cool to be given a different role on a project that involved a lot of singing but suddenly I was being the host of a TV show and it was very much trying on a different hat. I’ve always said singing was my greatest passion but I really enjoyed hosting a lot. It was really fun and I hope to continue doing that in the future.”

We were very curious to hear which pop culture icon Tom would choose to be for one day. And while we thought it might be a more theater-oriented person his answer did not completely surprise us. “I would say Michael Jackson, because I would want to know what it feels like to be able to dance in his shoes. I want to know what it feels like to do the Moonwalk in his shoes. I love his music. I think he was one of the best, greatest songwriters that has ever lived. It would be cool to have a brain that was able to write all the material that he wrote.”

Watch Real Life: The Musical when it premieres on Saturday, June 9 at 10 p.m. EST/9 p.m. Central on OWN.