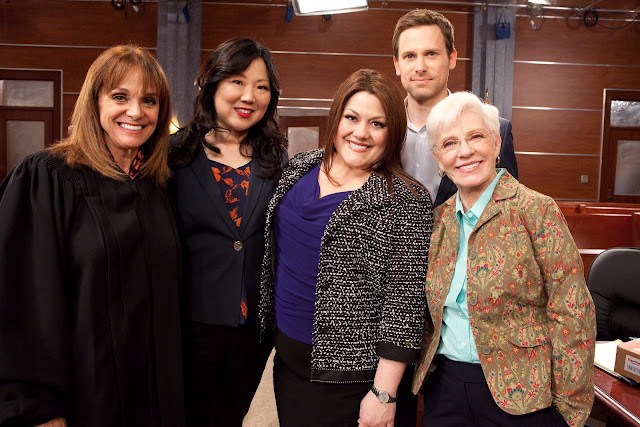 Photo by Annette Brown ©2012 A&E Television Networks, LLC
Sing it with us, “Our Patty loves to rock and roll, a hot dog makes her lose control — What a wild duet!” For as long as she lives, Patty Duke will be remembered as the fun loving, identical twin cousins Cathy and Patty Lane on her own self-titled sitcom in the ‘60s.
But in a recent conference call interview the Golden Globe, Emmy and Oscar-winning actress proved she doesn’t shy away from the legendary parts that have followed her for over 50 years. In fact she looks back on it all with joy and love.
When we mentioned to Patty that we recently had interviewed her TV dad (and uncle), William Schallert for the Archive of American Television she gushed, “He is the father I never had.”
She recalled working with him on The Patty Duke Show, saying, “He’s the consummate professional and then he does a 180 and he acts like a baboon, [keeps] the troops laughing and forging on. But I have been blessed with him in my life. He has been there for me at every turn — good, bad or indifferent and a matter of fact.”

And Patty has not been shy about discussing the “bad and indifferent” parts of her life, as she did in her autobiography Call Me Anna. But despite her tumultuous young adult and teenage years, Patty looks fondly upon her on-screen clan from the ‘60s.
She revealed, “The actors who played the family members really not only saved me but brought me great joy during the day when we’d work because unfortunately it was not so swell at home. So their intelligence, their love, their caring is just emblazoned into my heart.”
Patty also spoke fondly of her guest stars on an upcoming episode of Drop Dead Diva. She recounted, “There was not a person on that set who was not gracious and kind and great senses of humor led, of course, by [the show’s star] Brooke Elliott.”
But there’s another group of actors that Patty is longing to work with — the cast of The Big Bang Theory. An active tweeter, Patty casually mentioned recently that she’d like to play the frequently mentioned Meemaw on the sitcom. And her Twitter followers jumped on the bandwagon — hoping to build momentum and help her land the role as Sheldon’s grandmother.
Patty couldn’t hide her glee at the idea of playing the coveted part. She acknowledged, “Oh my god, I would die to be Meemaw. I would just die. And I happened to mention it on Twitter and people picked it up and they’re rolling with it.”
So far she hasn’t heard a peep from the decision makers at The Big Bang Theory. She conceded, “I don’t know that the folks who do the hiring are interested.” Not one to leave things to chance, Patty is taking matters into her own hands. First she recorded a video of herself singing Sheldon’s feel better song, “Soft Kitty.”
Patty explained her motivation to make the video. “My granddaughter made me do that. My 11-year-old granddaughter called me up and said, ‘Nanna, go now, use whatever camera you’ve got and do ‘Soft Kitty’. Now the me of yesteryear would have said, ‘I’m not going to do that. That’s ridiculous. That’s so bold.’ I tell you within 10 minutes it was done.”
See for yourself here:

Patty has also started an online petition to rally fan support. And when you hear what she has to say about the idea of appearing on the show, you’ll want to go and sign it right away. “I would feel that I’d died and went to heaven if I could get the part of Meemaw on The Big Bang Theory… Just to be in the same room and watch them do what they do would be a thrill.”
Sign the Patty Duke Meemaw petition and tune in to Drop Dead Diva on Sunday, June 17 at 9 p.m. EST/8 p.m. Central on Lifetime.
P.S. If you happen to see Patty out and about, don’t shy away from your urge to approach her and croon that famous Patty Duke Show tune. She confessed, “I get a bigger kick when they sing the song and they know all the words. People come up to me in airports and ladies rooms and they’ll break into song. It’s so much fun to be part of some larger culture.”


For related stories check out:
On the Red Carpet with the Cast of Breaking Bad
An Evening with Carl Reiner (and Dick van Dyke)