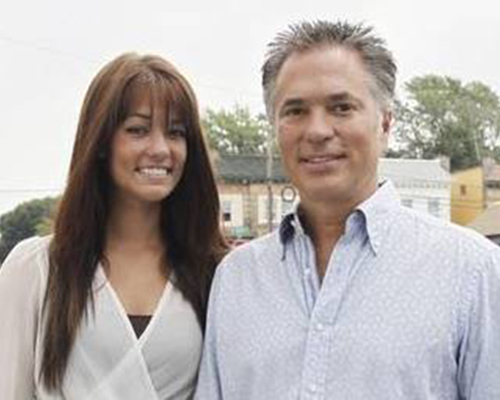 ABC's reality series Secret Millionaire returned on Sunday, June 3 with a whole new season of undercover business people extending a helping hand to needy people across the country. In the first episode renowned artist Scott Jacobs takes his 18-year-old daughter Alexa into the world of the homeless in Newark, New Jersey. What transpired changed their lives perhaps more than those they donated money to.

We spoke with Scott and Alexa in an exclusive interview about their Secret Millionaire journey and what it taught them about themselves and each other. Scott, who made his fortune as very successful fine artist, had a difficult childhood in New Jersey, so the journey brought up a lot of emotions for him. But having his daughter with him helped him in the process.

He professed, "The thing I learned about Alexa is that she's an amazing women. At first I didn't know if she could handle it, how she would be put in this situation." But he recalled a moment when they were inside Penn Station, "I wanted to stay in there because I felt safe in there and Alexa dragged me out. She wanted to go out on the street and I didn't think she had that in her. She did great. She held it together more than I did."

He added, "It's a very emotional show. I'm sure every episode is emotional. Ours was extremely emotional for me and I get choked up. I can't find the words. And I was just proud of her. To see her be able to do that side-by-side with me was an amazing experience for me as a father."


Alexa also learned a few things about her father. She joked, "He's a big ol' sap." She stated on a more serious note, "He has a huge heart. He really acted like it was his children that we were helping, as if it was someone that he knew. They were complete strangers to us and he gave them his heart and really put his all into it and showed them how much he cared."

They also walked away from the experience with new insights into themselves. Scott recounted, "The thing I took from this show was getting my priorities. I've always wanted to be successful. I always liked having money. It seemed like it made things easier. But with a lot of that money I bought things. I bought cars. I bought houses. I've got motorcycles. I've got a huge art collection. I realized after doing the show that that money can be used for greater things. That money can be used to help these charities."

He continued, "I learned the importance of that — to give back, to pay it forward and to set an example not only for my family but for other people that know me, other people in the nation to get on board. If 100% of all the one percenters in the nation did what we did, maybe there wouldn't be any poverty in the United States. It was a great thing to pay it forward. It made me feel awesome."

Alexa walked away realizing there is more to life than material possessions. "It's about having your family and a tight support system there with you all the time. And having an open and beautiful heart to help people that you don't know, to want to go out there and volunteer. I'm excited to go volunteer this summer and try to find different places anywhere I can help. I'd absolutely love to just give my time." She and her sister Olivia have already volunteered at a local food bank and plan to seek out more charities to help out over the summer. She stated, "Anything I can volunteer for, I'll do this summer — just to help to spread the message to open people's eyes a little bit to what's really out there."