Brandy Norwood on Her New Album, Finding a Purpose and Whitney 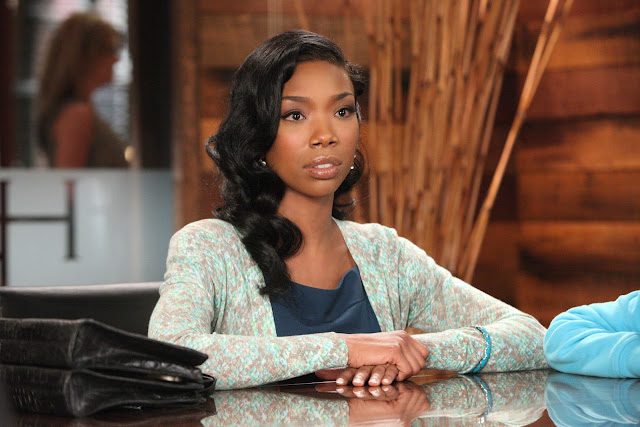 To some Brandy Norwood is better known by a single moniker and a singing career. Others think of her as a TV star from shows like Thea and Moeshe. And after a turn at reality TV with her brother Ray J, Brandy returned to series television and singing. Last season she was on three episodes of Drop Dead Diva and now she’s back again this year for two more playing Parker’s ex-girlfriend and the mother of his child. She is also just weeks away from releasing a new video, to be followed by a new album. The CD will be called 211 — in honor of her own birthdate and coincidentally the day that marks the death of her idol, Whitney Houston.

Brandy has had a lot of ups and owns in her life, but she has remained resilient and has learned and grown a lot through the process. She is grateful for the fans, who she calls stars, that have stuck by her during her journey. She steps into her fears, sometimes literally as with her appearance on Dancing with the Stars, and tries to ignore the pressures of being famous. In a recent conference call interview she addressed all of this and more.

On Naming Her New Album 211
“That’s the day that I was born and every year I grow and I evolve and I become a different person, everyday actually. But you celebrate the day you were born and you try to get better and better. And it's also the day that I lost my idol, [Whitney Houston], but gained her as an angel but lost her in the physical. So that day has really become so special to me and I just dedicate my life to just living my purpose and doing what I'm supposed to do.”

On Missing Whitney Houston
“I really miss her. I miss her so much and I love her so much. And this is the person that I looked up to and she was the possibility for me. She was everything in terms of singing. [Because of her, I believed] everything could happen for me at one point in my life, she was the reason. And her spirit was infectious… I can't even put into words what her voice meant to me and what she meant to me as a person. And she will forever be loved and missed.”

On Her Upcoming Video ‘Put It Down’
“You can expect a video in July. I'm really excited about it. It's my first single since four years ago. So it's great to be back on the music scene. It's great to have a song with Chris Brown and it's going to be an amazing run… I can't tell you who's directing it. It's so sad, because I want to tell you so badly. But it's going to be a great video. The treatment is great. And just the extra addition with Chris Brown it's going to be an epic video. I hope so because I haven't had one of those in a long time, so to be on this path it just feels really great.”


On Facing Fears
“We all feel the fear. But we shouldn't let fear hold us back from doing, what we feel is the best thing for us. I'm the type of person to face my fears and there have been so many circumstances where I've almost allowed my fear to hold me back but I feel so guilty about it that I'd go ahead on in faith. A recent fear that I've had was to do Dancing With the Stars. And that fear was so strong I felt so guilty when I was like, ‘No I shouldn't do it.’ And then the guilt just made me say, ‘You know what? I have to face it. I don't know how great I can be.’ And this other personal thing in my life that I've experienced that fear has almost got the best of me. But I try to face it as much as possible and you realize on the other end of the stick, fear is just an illusion, it's not even real.”

On the Pressures of Being a Celebrity
“ I think this business is partially about always looking your best. In this day and time you can't go outside unless you look your best because paparazzi is around and they're dying to get a bad picture of you. So, yes, there is pressure there but I try to stay true to myself. If I feel like makeup, fine. If I don't, fine. It's whatever I'm feeling in the moment. I try not to let this business dictate what I do for myself. I do keep myself up. I do work out. I do try to take care of myself as much as possible. But that's for my health. It has nothing to do with how I think people look at me or how they feel about me.”

On Singing Vs. Acting
“My music is a little bit easier for me because I'm completely myself. I get in the studio and I just let go. I just close my eyes and I sing what I feel and whatever comes out, comes out. Pretty much my music is the soundtrack to every stage in my life. So I'm able to be transparent in my music and also able to just be free in music. With acting I'm playing somebody completely different than myself, but also have to add pieces of myself to the character to bring the character to life… I have to bring the truth and the reality to that character as well. So that's a little bit more of a challenge for me, but I'm working on it and I definitely see a future in the acting for me because I have such a passion for it.”

On Why She Calls Her Fans Her Stars
“Hi stars… I can just honestly just share with everybody on the phone that the stars, they believe in me when I don't believe in myself. And they have kept me going besides my family they're like my extended family. And whenever I need to be uplifted I go and read their comments on Twitter and some of the emails that I've gotten from other stars that have sent me things from other stars. So it's just amazing to have an extended [family] that, not only looks up to you but holds you up and makes you shine. So that's why I call them stars because without them I couldn't shine. I couldn't be the type of entertainer that I want to be and that I'm growing into becoming.”

On What She Hopes People Learn About Her
“That I realized that [entertaining] was my purpose and that I gave all I had. I really love music and I really love everything that I did and I put my all into it. And at the end of the day, I'm just here for service, that's it. I realize that, when you grow up, you want to be famous, you want to be a star. You want to be popular. But it's not about that for me anymore. All that's great but it's really about living out my purpose and really giving back to the people who believed in me for all these years.”


What's In Store for Season 4 of Drop Dead Diva?