Wayne Brady Returns to Improv on Trust Us With Your Life 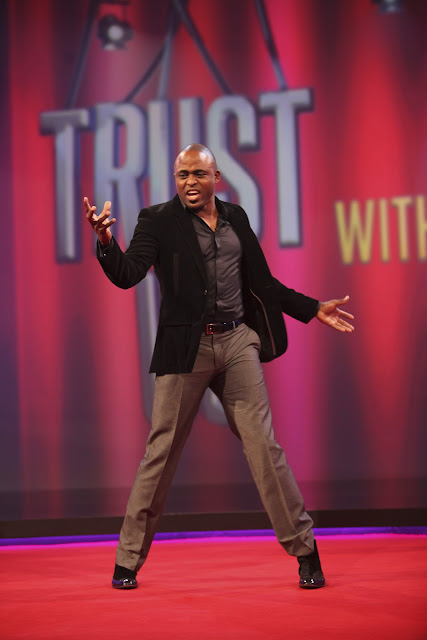 Wayne Brady first hit the scene as the bubbly, singing improv star on the U.S. version of Who’s Line Is It Anyway? After that show ended he spent the intervening years hosting a self-titled talk show and the game shows Don’t Forget the Lyrics! and the new Let’s Make a Deal.

But he never wandered too far from his first love — improv. He made appearances on the BBC2 show Fast and Loose and did a guest spot on Drew Carey's Improv-A-Ganza on GSN. And he’s done live shows with his friend and Let’s Make a Deal announcer Jonathan Mangum.

Now Wayne is heading back to prime time with Trust Us with Your Life. On the improv show Wayne and his pals will riff on key moments lived by celebrities like David Hasselhoff, Ricky Gervais, Jack and Kelly Osbourne, Serena Williams and Mark Cuban.

It all starts when a star shares his or her life changing moments. Then the improv geniuses take over, utilizing a number of techniques including comedy scenes and game show formats to recreate the celebs memories.

In a recent exclusive interview Wayne talked about returning to the spontaneous comedy stage. “It’s a great feeling to be involved in a good show. It isn’t that I sat at home and said, ‘Oh, I can’t wait until the next improv show pops up.’ I’ve been very busy just doing everything else under the sun. So it’s great to do this on TV again, because I’ve been doing it live for years on our tour.”

He continued, “It’s so fun to get back to do it for the fans of Who’s Line. Because there isn’t a day that goes by that we don’t get some kind of Tweet or email messages or ‘Hey, we really miss Who’s Line. We love that. Can you guys do that again?’ And I’m fond of telling them, ‘No, we can’t do that again.’ You cannot duplicate that. Why would you want to do that just in life?’”

The Emmy-nominated host may not be able to recreate Who’s Line, but he will reunite with his old friend from the show, Colin Mochrie, who will serve as co-host. And there will be a few guest improvisers from his old show including Brad Sherwood and Greg Proops.

Still Wayne pointed out, “To be able to do something brand new, which has a taste of Who’s Line, but to be able to flip it so that no one can say, ‘Oh, you’re just doing Who’s Line again.’ That’s an amazing feeling. It’s like breaking some sort of barrier and that’s very cool to me.”

There’s one new addition to the series that Wayne couldn’t help but gush about — Fred Willard. Wayne explained, “He grew up loving TV. Everything he’s done —Fernwood Tonight, Spinal Tap. He is one of those guys who I can honestly say, without any showbiz hyperbole; he is one of the most talented TV performers that’s ever worked. And my aim is to be like him someday, to be able to have done this from a young age and to do it until you can’t do it anymore — and to be so fast and smart and facile. So working with Fred definitely a ten.”