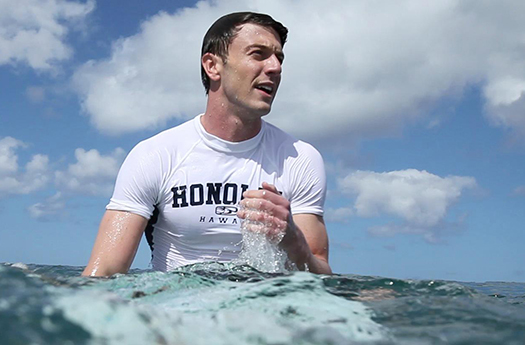 For anyone stuck in a dead end job and dreaming of following their passions, a few episodes of Fuel TV’s Clean Break might provide a little inspiration. Steven Helmkamp is one of three guys, removed from the reality of their day-to-day grind and dropped in remote parts of Hawaii for the adventure of a lifetime. The three strangers — Steven, Chase Penny and Luke Rogers — were asked to swim with sharks, scale steep mountains, surf double overhead waves and mountain bike downhill at more than 25 miles per hour.

Sounds like a piece of cake for an outdoorsy guy like Steven. He grew up in Florida and loves to surf and hike. He considered himself pretty athletic until this challenge came along and pushed the term athletic to new heights. But sick of his job as a medical salesman, Steven was ready for the experience of self-discovery.

In a recent exclusive interview we asked Steven the most valuable insight he got from all this. He replied, “I was most surprised to learn that when I don’t want to do something I’m quick to say, ‘No, I don’t want to do it. It’s not for me.’”

He continued, “What I learned through this trip was that I’m really capable of doing a lot more than I thought. I’m really able to do all these extreme sports that I’ve never tired before. I’ve never tried stand up paddle boarding or tried rock climbing like this and I’m in my head thinking, ‘Can I really do this? What if I can’t?’ But I’m a pretty good all around athlete I have to say, for just going out the first time and trying to do it.”

Steven also walked away from Clean Break with another valuable thing — lifelong friends. Before the show Steven, Chase and Luke were complete strangers, in fact they didn’t even meet until they landed in Hawaii. But having shared this difficult, and sometimes even frightening, adventure together they have a bond none of them expected.

Steven said, “Those guys are like brothers. We still talk. We still hang out even after the show… I’m so glad that I was able to do this with two other guys rather than by myself because having these two other guys to experience and to share all these adventures with was awesome.”


He described his cast mates, “They’re both unique in their own way. Luke was very amicable and loose and easy going and always up for a good time. And Chase was more of a nurturing father type. He’s a stay-at-home dad so by nature he brought that onto the show and was genuine and very authentic. We got along great.”

So after such a life-changing experience Steven had some advice for anyone wanting to make a Clean Break in their lives, “Do it. Be about it. Stop talking about it and be about it. Have the courage to fail… That’s the only way you’re going to grow. Some of the most successful people you’re going to meet in your life are the biggest failures. And they’ll be the first to tell you that.”

Steven is a medical salesman by day, but he is pursuing a career in Hollywood as an actor. He told us this is what he is most passionate about, but it’s not about the fame and fortune. Steven wants to be successful for a very unselfish reason. “I’m really passionate about making it to the level that I want to be at and getting up to a platform of where I have an audience where I can help better people. [I want to get to a place] where I can help work with charities and different organizations and really be an inspiration to young men through being a role model, a life coach and [stressing] the importance of keeping and having faith.”

When we asked Steven what pop culture icon he would want to be for one day, we were expecting maybe an extreme sports figure or legendary athlete. Instead he picked someone he had a much more personal connection to. He told us, “I recently saw an old photo of my dad and he looked a lot like Elvis Presley. And so I started researching Elvis and he has a hell of a story. So I would love to walk one day in the shoes of Elvis Presley.”

Posted by Pop Culture Passionistas at 6:37 AM