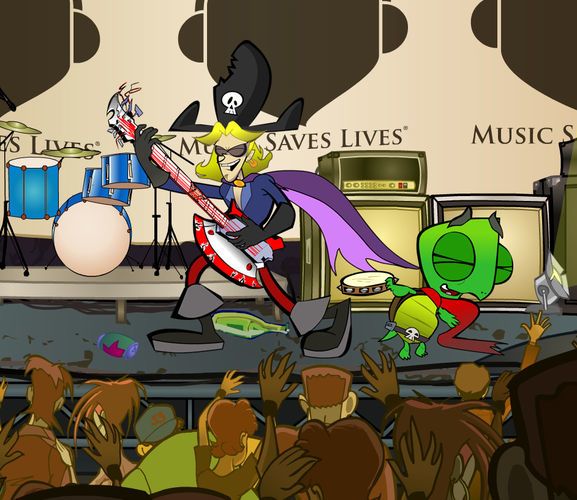 If you haven’t seen the animated series Supa Pirate Booty Hunt yet, you might want to check it out. The show follows the misadventures of Captain Zack Stevers and his sidekick, Daniel the turtle. It’s the brainchild of Smorgasboard Productions founder Dahveed (aka David Kolodny-Nagy) and Steve Sievers from Level 27 Media. But be forewarned — these raunchy pirate tales aren’t for the lily-livered cowards who shy away from bawdy humor.

As the title suggests Captain Zack, who was named after Zack Morris from Saved by the Bell, and Daniel travel the seven seas in search of all kinds of booty. As Dahveed noted, “I wanted a name that said everything so — Supa Pirate Booty Hunt. What’s he about? What’s he doing? And he’s hunting for booty – both treasure and ladies.”

And no one has a way with the wenches like Captain Zack does. We asked the show’s creators if they had a favorite pick-up line from their lady loving, if not landlubbing pirate. Steve picked, “My favorite captain Zack pick-up line is definitely, ‘X marks the spot and then I see my treasure.’ That one’s really funny.” While Dahveed went with, “Hey baby, how’d you like to walk my plank and hoist my sail?”

Although Steve is married, Dahveed admitted he’s tried one or two of Captain Zack’s lines in real life now and then. But he explained, “I usually show the cartoon or sometimes I dress up as the character Captain Zack at parties and events. And so I’m always in character because if I just did it straight, usually pick-up lines don’t really work. If I’m doing it and I’m showing a girl my cartoon, then using a line usually does work because they’re like, ‘You’re an animator and you like funny cartoons and okay, that’s a clever line.’ In that regard, it works.”

But Supa Pirate Booty Hunt isn’t all about getting girls. In fact Steve and Dahveed also use the show to help out the charity Music Saves Lives. They’ve helped raise awareness of the organization, which calls upon young people to donate blood and bone marrow registration, by doing SPBH PSA’s featuring rock stars like 3OH!3 and Dave Mustaine from Megadeath.

And not only does it feel good to help a worthy cause, the collaboration has allowed Steve to combine his two greatest passions. He remarked, “It’s been such a pleasure working with Music Saves Lives. And they worked with Warped Tour and the Mayhem Festival. And I get to go out there and do comic book signings at these concerts I love going to. So it’s a dream come true that I can involve music and cartoons together because I always describe myself as a dork rocker because I love cartoons and music so much.”

They’ve also amassed quite a fan following. In fact one devotee just recently displayed the highest mark of true megafandom, as Steve revealed, “We’ve got our first fan tattoo. This girl from Maryland has Daniel the turtle tattooed on her leg. So we’ve got to be doing something right. I never would have expected that.”

Of course with great power comes great responsibility. As Dahveed added, “You have an obligation when someone tattoos your characters on their leg. You’re like, ‘We’ve got to make this series blow up really big or else that person just looks silly.’”

That doesn’t seem like it’s going to be a problem. Dahveed and Steve will be mingling with fans at Comicon in San Diego later this week. There they’ll hand out copies of the a comic book based on the episode that featured 3OH!3 at the PRA International Booth. And they’re inviting followers to join them for their official after party Steve told us, “[It’s] happening Saturday, July 14 at Wet Willie’s from 9 to midnight, so anyone attending Comicon come on out. It’s a free party and you can get a free comic signed by Dahveed and I.”