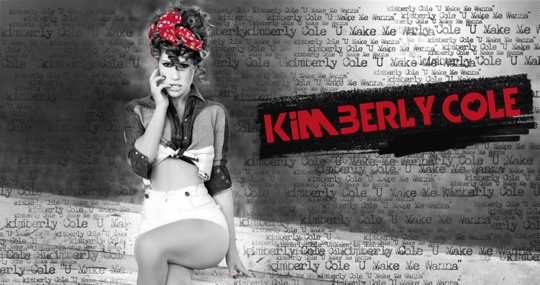 Kimberly Cole has been on the fast track to stardom over the last few years. First came her 2010 album Bad Girls Club. Then the track “Smack You” was used to promote The Bad Girls Club and hit #4 on the Billboard Dance Chart. She’s been on the road with acts like Katy Perry, LMFAO, Cobra Starship and Shiny Toy Guns. And she’s dedicated her time to entertaining the troops – headlining a U.S. tour with a group of high profile comedians to give back to the Marines.

On top of all that, Cole’s latest video for “U Make Me Wanna” has become a viral sensation thanks in part to an appearance by comedian-actor-dancer Keith Apicary (aka Nathan Barnatt). But that’s another story, for another blog (check back next week for that one).

Getting to the top in the cutthroat music industry takes dedication. And Kimberly’s willingness to keep her eyes on the prize can be traced back to her childhood. In a recent exclusive interview she told us about a very unique talent that has helped her keep on track.

The dance music artist revealed that she became focused on honing her skills and traced her current drive back to her days in the sport. She revealed, “I was so crazy, passionate about it. That’s something about my personality is that I am a perfectionist to the core. If I’m gonna do something, I’m gonna do it all the way.”

As a kid, Kimberly didn’t really understand that competitive roller skating wasn’t a common extra curricular activity. She recalled, “I didn’t know that it was weird when I was little. I’d wear my skating dress to school and I’d have roller skates because I’d have practice after school. And people did not get what I did at all. They asked if it was roller derby and I was like, ‘No, I’m training for the Nationals.’”

Kimberly did a lot more than make it to Nationals. She explained, “I practiced from the age of four to 19. I would be in the skating rink training for four or five hours a day. I went to the World Championship. I was hardcore. I would be in class sketching roller skating outfits in school. It really taught me how to work hard for something because it was a demanding sport.”

But one can only take roller skating skills so far. As Kimberly confessed, “My dad’s a surfer and a volleyball player and a tennis player. He wanted me to do a sport that I could take to college. Clearly roller skating isn’t offered in college.”

Still she found ways to make all that hard work pay off. “I started making my money back because when I was 18. I started booking all kinds of skating commercials because I’m a dancer, too. There are only like four people who can dance and roller skate at the same time, so I was cast as the roller girl in I can’t even tell you how many things — videos, commercials and movies. And so I paid back all the skating dresses that my mom bought me when I was little.”

Anyone who saw Kimberly open for Katy Perry saw her talent in action when she laced up and zipped around on stage. And she has bigger dreams of incorporating it into her act in the future. Kimberly teased, “I have a roller skating show that I was doing for a while but I’m not going to do it until I have the budget to do like a VMA performance because people are going to be like, ‘Oh my gosh.’ It’s kind of crazy. I’m kick ass at it.”

Until then, Cole is working on new music, which she described as “a big departure from what I’ve been doing. It’s more vulnerable. It’s still edgy.” She’s also continuing to tour.

And it’s hard to believe she’s found the time to host the new StyleHaul series docu-series FM which will feature guest stars like Kat Graham and Wiz Khalifa. She explained the inspiration for the upcoming show, “I’m addicted to fashion. I’m always having to change it up, reinvent, be this version of myself depending on what song I’m performing. And I did a lot of hosting for MTV and I hooked up with all kinds of networks as a host.”

She continued, “It was a perfect balance to really collaborate with a network that had to do with my music, who I am as an artist. Because so much stuff happens as an artist that people don’t get to see – like the behind-the-scenes, the problems that occur. It’s about my life with fashion, integrated and as a backdrop.”

So of course, we needed to hear Kimberly’s top three fashion tips. She started with the concept “dress how you feel. Everyday don’t be afraid to have different styles. One day you can be in florals and one day you can be a little hip hop, dancer, street.” She also advised, “Be able to play. Don’t be afraid to mix style together. And if it feels good and you like it, own it. You can do anything. You can wear anything.”

Download Kimberly Cole’s music on iTunes, catch the “U Make Me Wanna” video on YouTube and stay tuned for more info on FM on StyleHaul.