Fred Willard Hosts Trust Us With Your Life 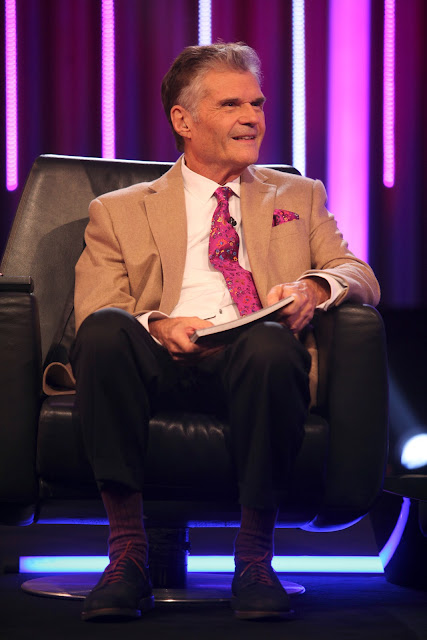 
When we were kids there was nothing we liked better than an adult comedian, who played simple-minded characters with a surprisingly multi-layered spin. We didn’t like the ones on kids’ shows who pandered to childish sensibilities. We liked the ones that we’d catch when we’d sneak down stairs after our parents went to sleep and we’d watch our older brother and sisters’ shows. We couldn’t help but be drawn to guys like Herb Tarlek on WKRP in Cincinnati and Ted Baxter on The Mary Tyler Moore Show.

But our all-time favorite dopey sidekick was Jerry Hubbard on Fernwood Tonight. Fred Willard played Barth Gimble’s (Martin Mull) Ed McMahon on the fictitious Ohio-based talk show. Even as kids, we knew that he took on the part better than any one else ever could. So we’re very excited that he’s coming back to weekly television in the improv show Trust Us With Your Life.

We’re obviously not the only ones who love Fred. He’s worked consistently since the Norman Lear comedy, and its sequel America Tonight, went off the air in the late ‘70s. He played the colonel on the military base in This Is Spinal Tap, one of our top ten movies of all time. He was Mayor Deebs in the classic Steve Martin flick Roxanne. And he and Martin Mull reunited as a gay couple on Roseanne, delivering one of TV’s first same sex kisses.

But it’s his work in the Christopher Guest ensemble for films like Waiting for Guffman and A Mighty Wind, which catapulted Fred’s career into the household name stratosphere. In fact one of these improv-based projects is among his personal favorites.

As he told us in a recent exclusive interview, “The high point was doing a movie for Christopher Guest called Best in Show. I did four different movies for him and that seems to be the one that was most popular and the one that people remember most when they talk to me.”

But he also has a TV experience that’s especially near and dear to his heart. He revealed, “I did about 90 appearances on [The Tonight Show with Jay Leno], doing a character called William J. Fredericks. They were sketches and each time I’d do one I’d assume that was the last one I was going to do. And then they’d call me again. Sometimes I was doing two a week, doing something about the news. That was the most enjoyable job and the most media exposure.”

Now he’ll play host to a revolving door of celebrities on the improv show Trust Us With Your Life. Fred will interview stars like Ricky Gervais, David Hasselhoff and Serena Williams. Then a comedy troupe led by Whose Line Is It Anyway? regular Wayne Brady will recreate moments from the guest’s life.

Fred explained the appeal of the show for the famous faces that they attracted. “Who wouldn’t want their life discussed on a television show in a positive light? The producers assured them all that we weren’t going to make fun of them or mention anything that they didn’t want them to mention. So it’s just a way of putting them in the spotlight and then including them in part of the fun.”

When he’s not entertaining comedy fans around the world, Willard enjoys his greatest passion — sports. He told us, “It’s always great to be interested in some aspect of sports, no matter what area it is. Now in the last few weeks it’s been tennis. And before that in L.A. it was basketball. Personally, it’s baseball for me — on any level, from college up to the major leagues. And I just drove up to Bakersfield to see a minor league baseball game. And I’ve been to Dodgers Stadium a couple of times. And the first thing I do in the morning, I turn to the sports page to see what’s going on.”

Funny, no mention of the Westminster Dog Show. We were a bit surprised by that, but even more caught off guard by the pop star Fred would choose to be for one day — Elvis Presley. He told us he’d want to walk in the King’s shoes for one day “because he was unusual, he came out of nowhere and he got about as big as anybody can ever get. Plus I loved his music. So just to be related to that for one day, there would be no down side I don’t think.”

We’re glad that he’ll simply continue to be Fred Willard — working his magic on Trust Us and reprising his Emmy-nominated role of Phil Dunphy’s dad, Frank, on Modern Family. Check him out on TrustUs With Your Life on Tuesday nights at 10 p.m. EST/9 p.m. Central on ABC.


The Biggest Loser's Lauren Lee Finds the Athlete Inside