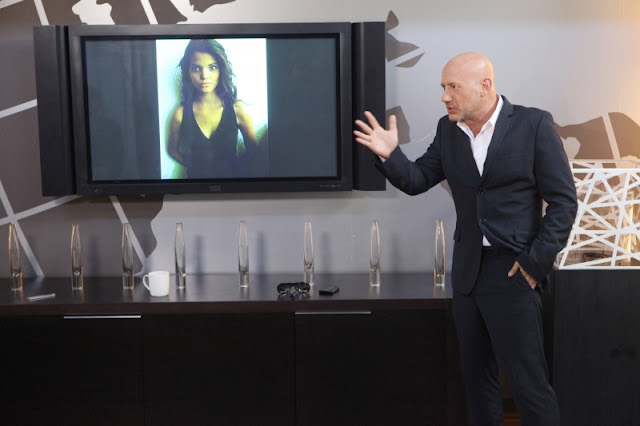 This past January the CW show Remodeled came and went with a bit of a whimper. But someone took notice. The series, which takes an inside look at the fashion industry legend Paul Fisher and his new venture The Network, recently won a Rocky Award at the Banff World Media Festival. The little show that could was up against the big boys like The Apprentice and Storage Wars. And now the CW is giving Remodeled a second chance, by replaying the first six episodes and airing two unseen shows this summer.

In a recent exclusive interview, we spoke with Paul and Meghan Wiggins, the star model to surface from the series this season. Paul’s passion and enthusiasm for his work and his love for each and every model he represents is palpable… even through phone lines. His energy is infectious and his hope to change the modeling world is admirable and inspirational.

Paul made his name in the fashion world representing the stars like Naomi Campbell, Carla Bruni and Carol Alt. The Network is Paul’s brainchild. He has united 50 mom and pop modeling agencies around the world into one big community. Together they represent 14,000 models globally. On Remodeled we see Paul hand pick and transform some of the agencies from flailing businesses without a point of view to successful big time contenders. He personally helps select the “kids,” as he calls them, to be part of The Network and chase the dream of becoming a star.

But to Paul it’s not about becoming a famous face. To him there is only one reason to create this Network. His goal is “to force the top decision makers in the fashion industry to take social responsibility for the images that they’re putting out their into the world.” It’s an uphill battle for Paul but one he’s willing to fight ‘til the death. He wants to protect the young girls who are so frequently taken advantage of in a difficult industry.

He explained his vision, “We’ve aggregated our models’ social media accounts underneath one banner, on one platform. We believe by March or April of this coming year we’ll have about one hundred million followers in our community. And at that point in time if these magazines and if these designers don’t stop using super skinny girls and super young girls and airbrushing, etc, and if they don’t start taking responsibility for the images they’re putting out there, our goal is to tell our one hundred million followers to stop buying their clothes.”


That’s a pretty powerful message. But is the industry changing? He replied with an emphatic, “No. It’s going in the opposite direction. There’s a lot of people out there talking about it. There’s some people that have some beautiful thoughts about it but I don’t see a unified voice. I was just at the shows. I saw every girl walking down the runway. She was 115 lbs. The normal woman in today’s world is 5’4” and 143 lbs. Now that’s beautiful to me, ‘Healthy is the new skinny,’ as Meghan says so eloquently.’

So even though Vogue magazine claims they will no longer hire girls under 16 and vows to be sure the models maintain healthy weights, Paul thinks talk is cheap. He said, “People are operating from fear and they’re afraid they’re going to lose business and they’re afraid about but their bottom line, but what they don’t understand is the affect that they’re having on the youth today.”

Paul is all about protecting his kids. Of his 50 agencies, 48 of the them are run by women. He noted, “The reason for that is we are trying to create a very, very safe environment.” He told us, “I don’t have any children of my own and I can assure you that when Meghan walks down that runway for the first time when I watched her on the show, I was bawling my eyes out… These kids have a very profound affect on me personally and a few of them obviously really, really touch my heart… My job is to protect these kids. Their families put their youth in my hands and I take that as a pretty darn serious responsibility.”

Meghan, who Paul and his team plucked from behind the counter at Keva Juice in Albuquerque, New Mexico, and is now the face of Guess, said she does fell protected by The Network. “Paul and Olga [Tavarez] have my best interests [at heart]. I know they wouldn’t let me do anything that would give me the wrong image. I trust them 100%.”

Paul was beaming with pride over his success story, “I am so humbled to be a part of her life and so proud of this young person… To watch Meghan go from Keva Juice and now be Mr. Marciano’s muse and be the face of Guess, that has never happened in a modeling show ever and I’m very, very proud that this kid is the first one.”

But Paul has plans for his kids, besides just becoming famous. Another tenet of The Network is that the models must give back. He pointed to the true success stories in the celebrity world — people like Robert Redford, Paul Newman, Brad Pitt, Angelina Jolie and Madonna. He stated, “There’s a reason why those people stay in the game for a very long period of time. It’s because of their philanthropic, giving back thought process.”

He continued, “We’re trying to teach our young people, it’s all about your consciousness and your intentions. If Meghan wants to become a famous model because she wants to see her face up on the magazine stands, I’ll make that happen… It’s already happening. But if she wants to stay in the game for a long period of time, she must want to become that famous model because she can give back more, because the platform will be higher for her so she can speak to more people.”

Meghan is embracing that philosophy and becoming a role mode to other young people. She said her life has changed dramatically since starting to work with Paul and not just because she’s made mark in the fashion world. She’s been working with Dr. Jeffrey Sachs and the UN Millennium Project. She said, “It’s about struggling and huge hunger and poverty in Africa. I’ve always only heard about it. I’ve actually never really [jumped in] to it and that’s what Paul taught me to give back and I’m all for it. I never really realized how important it was. And now I’m starting to make it personal. So everything has changed.”

Paul’s mission is a daunting one, but he swears he will not rest until the modeling industry changes even if it takes one girl at a time. He remarked, “I’ve represented some of the most famous models in the world and I swore to myself I will never represent another model again for the rest of my life. I will only represent young role models. I will only represent young people that take their physical beauty as a blessing from god and if they don’t it will be the one thing that haunts them or the rest of their lives.”

He added, “This is something that’s inside my body that I wake up with every single day to fight this fight and I will not shut up until we win this game. And to me winning the game? Sitting front row at a Calvin show, a Versace show, and watching sexy, beautiful women that reflect our community today, watching them walk down the runway. And until I see that, then I will not sleep and I will not shut up until that takes place.”

Watch Remodeled on Monday nights at 9 p.m. EST/7 p.m. Central on CW. And visit Paul's website TheNetworkTalent.com for more information on the agencies, the models and the philosophies of a healthier, kinder modeling world.