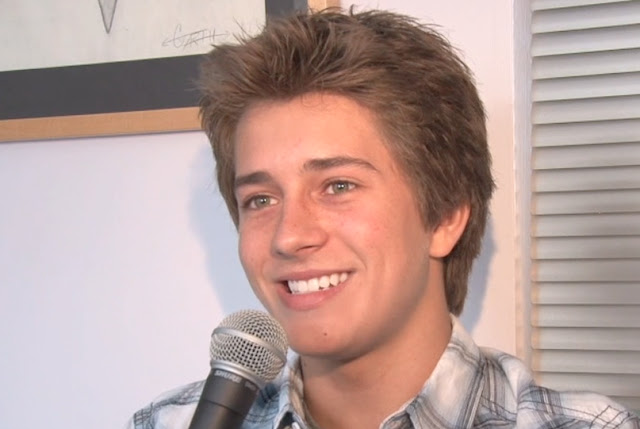 We’ve all heard the stories about the young kids who come to Hollywood from Anywhere, U.S.A., hoping to become overnight sensations. But Lab Rats star Billy Unger is living proof that it’s actually possible.

When he was ten years old, his folks brought him from Florida to L.A. for two weeks to go on a few auditions. While on their “very short trip,” Billy landed a role in the Nicolas Cage movie National Treasure: Book of Secrets.

He also managed to draw some instant fans while shooting his first feature film. The 16-year-old actor recalled, “Of course they have the little tours that go through the Universal stages. And because I was dressed up like I was from the 1800s, of course, everyone thought I was a somebody even though it was the first job I’d ever done. So it was really cool when people would get off the tour bus and they would be like, ‘What’s up? How you doing?’ They would want to take pictures just because you looked like you were in a television show or a film.”

He continued, “So that was my first taste of people wanting my autograph or taking pictures with me. Two weeks out, it felt great. They had no clue who I was or why I was dressed that way. But they wanted to take pictures anyway because they figured some day the movie would come out and they could say, ‘I took pictures with him?’ So, it was a good time.”

No doubt those people know who Billy is now. A few years later he was cast in a pilot called Billion Dollar Freshman, which would eventually become Lab Rats. He recounted the journey that he took on his way to TV stardom. “The only characters that you see on Lab Rats that were in the original pilot are me, Spencer Boldman and Tyrel Jackson Williams. The three of us were actually in the original pilot. And then when it turned into Lab Rats, they made changes. They added characters. They got rid of characters. They changed the whole plot actually. The only thing that was similar to the original pilot was that it was about three superhuman siblings.”

The changes paid off. The sitcom is now on hiatus, waiting for production on the second season to begin. Billy chalks up the series’ success to the close cast and crew who work tirelessly to entertain fans. He remarked, “We have the best set of any other Disney show ever… There’s not a single person on the set that isn’t doing the best they can to make each episode absolutely brilliant. And that’s why it’s perceived really well. It’s because everyone is putting their heart and soul into every script, every episode, every scene we do.”

But Billy isn’t resting on his laurels just because he’s on a popular TV show. He recently filmed a soon-to-be-released feature film called The Lost Medallion: The Adventures of Billy Stone and he started a band with fellow Disney XD star Leo Howard from Kickin’ It.

He added, “Honestly, I don’t look at it as work because I have way too much fun on set to actually classify it as work. I know a lot of people who are like, ‘Man, acting’s so much work.’ And I’m like, “No, it’s not. I having fun.’ And I want to keep doing that. I don’t ever want to give up acting. It’s something that I really enjoy doing and I see myself ten years from now doing the very same thing.”

And watch clips from our exclusive interview with Billy on YouTube.