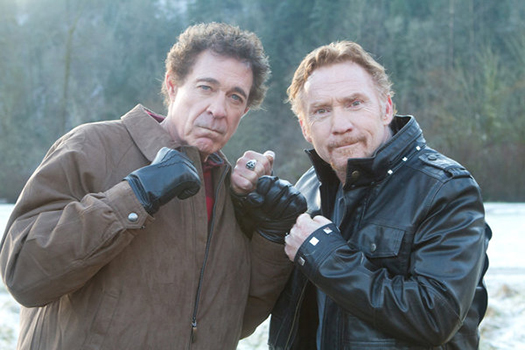 If you follow us regularly, you know we have a Pop Culture Bucket List that we have set out to complete. This includes visiting various sites where famous movies and shows were filmed, experiencing entertainment-related adventures and mostly talking to our pop culture icons. Last week we checked two off of the list at the same time — Danny Bonaduce and Barry Williams. A Brady and a Partridge together on one call talking about their campy Syfy flick Bigfoot. We ask, does it get any better than that? We’ll let you be the judge.

Danny and Barry were approached by Syfy to star in the made for TV movie about two enemies banding together to chase the elusive Sasquatch creature (who happens to be the size of King King for this film, of course). And the only team that made sense to cast for the parts was Danny and Barry — childhood TV rivals for our love and affection every Friday night.

Although the pop culture world tends to pit them against one another (case in point the Celebrity Boxing match from 2002) in real life the pair are friendly, though admittedly not best buds. They do however, share a deep mutual admiration and understanding of the other. Barry commented on the bond and on his defeat in the boxing ring, “Danny and I have had a nice relationship, a respectful relationship for years and years and years. Boxing is boxing. It didn’t mean that we didn’t respect each other. I did not however know that he was not just a boxer but also a triple black belt. The producers left that part out.”

Danny praised Barry numerous times during the interview for being the consummate actor and a complete professional who took the craft of acting very seriously. And Barry credited Danny with being the comic relief on a sometimes brutally challenging set — pretty much the characteristics we had hoped for when we learned about the call.

Danny talked about signing on to do the project with Barry. “You’ve got to remember that Barry and I, we are a part of a club, that by the way gets smaller as time passes, but it was a small club to begin with… The only reason I would have ever said no [to this movie] was if they asked me to do it with Corey Feldman. Shy of that I’d have done it. But doing it with Barry Williams really meant something to me… I believe The Brady Bunch came on right before The Partridge Family and I was just the right age to be a fan… The Partridge Family I didn’t really watch when it was on because I knew what happened. I had spent all week working on it. But I was a huge fan of The Brady Bunch. And on the few things that Barry and I have done together I’ve had nothing but the utmost respect for him… It had to be Greg Brady versus Danny Partridge in this movie or there was going to be no movie.”

Unlike some stars that are famous for one role, neither actor begrudges their ‘70s alter egos or grows tired of the references. Danny stated, “Almost all of the good things that have come to me in my adult life have something to do with the fact that I was on The Partridge Family… It’s funny, when I do interviews for things, and I do a lot of them, people almost seem afraid to ask the question. How can you possibly interview me without bringing up The Partridge Family? I can see because of some of the interviews that I’ve done with people who are mostly famous for one thing they did a long time ago and they really resent it. I’m not one of them. I could not be more grateful for The Partridge Family and know the blessings that it has brought me.”

Barry agreed with his co-stars point of view. “I’m sure there are things that I’m not considered for because I’m known as the good guy Greg from The Brady Bunch. But I’ve had a varied career that has included Broadway. I’ve been a DJ. I’ve written a book. I’ve produced movies. I’ve done every play I’ve wanted to do. I’ve got a great show that’s about The Brady Bunch. And I echo your sentiment Danny, there’s a tremendous amount of privilege that comes with people both being familiar with you but in a way that makes them feel good. Or sometimes takes them back into their own childhood when the whole world felt safer and more fun for them. So with anything there are there are two sides to everything. But overall, grateful would be the word I think that I would attach to my association with The Brady Bunch.”

But wait, back up. Did Barry just say, “I’ve got a great show that’s about The Brady Bunch”? You heard right. When he’s not on the road doing movies or plays, Barry has hunkered down in Branson, Missouri, and is producing a multi-media show called Lunch with the Brady Bunch. Road trip, anyone?

He has hired a cast of six kids who help him recreate the scenes, the songs, the original choreography, those Johnny Bravo dance numbers and so much more from the story of the man named Brady and his blended bunch. Barry commented, “I watch 50-year-old women become teenagers in the show because they’re back to 12, 11 years old when they were watching The Brady Bunch. It’s a lot of fun.”

And in case you were getting the wrong impression of the show, Barry assured us, “It’s not a corny show at all. It’s a legitimately entertaining, nostalgic ride through things that multi generations of people are familiar with. And I love it. I don’t even set my alarm to get up in the morning. I can’t wait to get going… I can’t think of anything else I could be doing that would bring me more satisfaction”

He even pointed out a nod to his current co-star, “At one point I talk about how the Bradys became a recording act because I had gone to the producer and I said, ‘Look, there are all of these families that are making records. And some of them are selling millions of records, why not The Brady Bunch kids? Look at the Jackson 5, look at the Osmond Brothers, the Archies and of course The Partridge Family.’ And then the Greg character in my show comes out and sings with everybody, 'I Think I Love You.'”

But while Barry recreates his heyday in Branson, Danny has moved away from Danny Partridge and is a Disc Jockey these days. He lives in Seattle and does a morning talk show, something he seems genetically suited for due to his gift of gab. He also has a very successful series for TruTV called The World’s Dumbest. He remarked, “I’m really blessed.”

Check your local listing for airings on Bigfoot on Syfy channel. And to get tickets to see Lunch with the Brady Bunch click here. And to listen Danny’s radio show live visit the KZOK website.