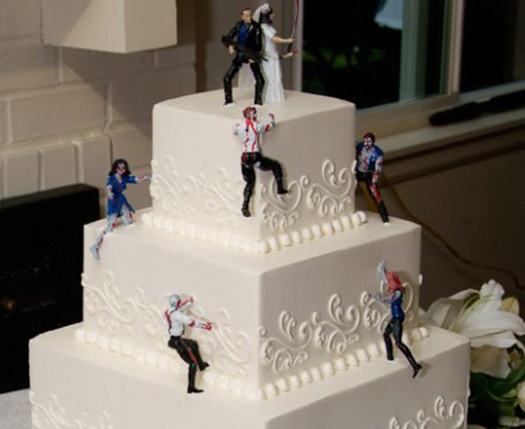 Zombies are very hot these days. In case you aren't aware of the brewing Zombie Apocalypse, brought on mostly by the popularity of the AMC show The Walking Dead, here are a few examples of the un-dead permeating popular culture.

Our favorite, and perhaps most worrisome, is the new trend of Zombie wedding cakes. But apparently, for those couples who have found a lasting bond over their love for all things gruesome, custom cakes are being created featuring blood, guts and night crawlers. These gorgeous, multi-tiered masterpieces look very much like traditional wedding cakes but the zombie-fied dioramas on top symbolize the couples' commitment 'til un-death do they part. To see more check out this blog of the top ten zombie wedding cakes.

Earlier this month at Comic-Con in San Diego people paid money to take part in The Walking Dead Escape event. For just $75 fans could be chased by Zombies. At the end of the 30-minute to one hour course, participants were checked with a special blue light to see if they were infected. The first 10,000 people to make it through the obstacle course bite free, got a special, limited edition run of the 100th issue of The Walking Dead comic book.


And in case you thought the zombie trend was limited to just humans, think again. Evidently there is an outbreak of Zombie bees. Scientists have discovered honey bees in California and South Dakota acting "zombie-like." Symptoms include straying from the hive late at night and walking (not flying) endlessly in circles. It seems the bees have been infected with some kind of parasite which causes them to lose all physical sensation, hence the zombie appearance.

The worst part, when the poor honey makers go to that great hive in the sky, the pupae crawls out of their body and looks for another host bee to infect and colonies are dying out at an alarming rate. So the scientists need our help. Report any odd bee behavior to ZomBeeWatch.org and be careful out there.