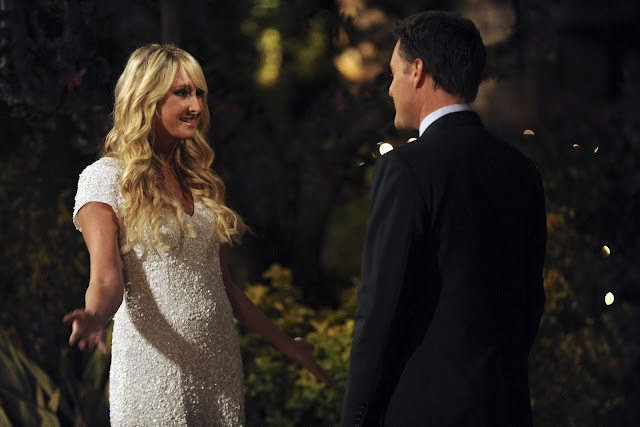 Things are really starting to heat up on Bachelor Pad with several love triangles brewing, old friendships begin destroyed and new romances blossoming. But how much of it is real and how much of it is in the pursuit of $250,000? In a recent conference call interview contestant Jaclyn Swartz commented on Reid’s master plan, Ed’s exploits, Chris’ love triangle and Michael and Rachel’s infatuation.

On Reid’s Master Plan Backfiring
“I was really upset by Reid and his actions and his decisions and the way that he was playing the game. It was very sneaky. And when you think that someone is working with you and really, they're working against you, its pretty hurtful regardless of the fact that it's a game. It was more sad to see because Ed is clearly sensitive… He doesn't like lying. I don’t think he signed up for this game thinking it was going to be like this. The way that whole thing went down was pretty shocking. The game just didn’t do good things for Reid. If Reid had just thought and relax and not try to pull these moves and shake up alliances, then he would have been smooth sailing. There was no way that I would have voted him off in a million years because I actually like Reid. And to see what the game did to Reid, it was pretty unfortunate.”

On Why Reid was Going After Ed
“I would hate to think that Reid is still not over the Jillian thing because it was a long time ago and that just would be kind of funny to think about. But at the same time, maybe it has a little of something to do with it… Maybe it would feel a little liberating for him to see Ed go before he goes, as opposed to last time where he tries to come back and ultimately failed… It is a funny little play on that past vendetta but I could see Reid being happy seeing Ed leave before him. Ed loves to say he's never a lost a rose before. So maybe Reid just wanted to see him lose a rose.”

On Chris’ Love Triangle
“Chris and his love triangle is something that I definitely steered clear off. I was shocked to see the way that things were panning out behind the scenes and I had no idea that he was giving Jamie that much of an impression, that he liked her. And I had no idea that him and Blakely had kissed. So, this was all news to me. And to be honest you're going to see another girl enter into this love triangle and it's going to become a love square. So, I think that Chris is in like the year of Chris and he is just going for it.”

On Michael and Rachel’s Budding Relationship
“I was shocked to see them together in the first place because we were all friends. Rachel and I had met Michael at our Women Tell All week when we were in California. And we all stayed buddy-buddy. So when they started hooking up, I was a little shocked. But they got close pretty quickly and Michael was very vocal, he used to say, ‘I’m crushing hard on Rachel.’ I saw them hitting it off. I don’t know if I really understood it but, hey, Rachel is my best friend and she seems happy, so I was on board with it. But when you form relationships in the house, the way that they can translate into the real world is a gamble.  So, at this point, I see them being serious, but I think that down the road things might change.”

On Who Surprised Her the Most
“Blakely definitely has surprised me thus far in the game. You guys all obviously saw my reaction to her being in the house, then my reaction to what I thought of her as a friend. And to be honest, coming into the house, I really just thought that we would completely butt heads and that I would want her out of the house immediately. And as I got to learn more and more about Blakely, as the game progresses and up through week three, I saw a side of her that I never saw before. This game, is pretty conniving.  And you have to lie a lot. You have to be able to trust certain people and Blakely led me to believe that she is trustworthy. So our friendship definitely took a turn for the better.”

On Choosing a Partner
“I went into this game with 100 percent confidence that I was going to win. I've had friends that have been on Survivor and I've definitely got great advice from them. Like if you go into this game thinking you're going to win, you have a better chance of winning than if you go in thinking that you might not. So I was playing the game from the minute that I walked into the house. And I definitely spotted Kalon and Chris first. And I had a little side conversation with them but then it's funny because I think Kalon maybe my partner in the end. And then, I see by watching these episodes, that he was also telling seven other players that he was their partner, too. So I feel like I had some back up plans that maybe weren't shown.  But Ed actually toughed it out in that first challenge and I was the one who fell out of the heart first and he could have stayed in there all day, despite his antics on the first night. And that gave me more reason to believe that I could stick with him and that he might be good at the physical challenges. I happen to luck out with Chris as my partner on hot sludge funday but so far it's still good. So there is no reason for me to change and at this point, I already am starting to trust Ed a lot. And if you trust your partner, then you seriously should not make a move to leave them.”

On What She Learned About Herself from Bachelor Pad
“I have learned a lot. I'm really funny. This whole experience has really opened my eyes with so many things because I hate talking about trust and the feelings and this and that. And I also don’t like opening myself up to people who I probably wouldn't come in contact within my day-to-day life. It's just the way that I am, I have my friends. I don’t necessarily need to make new friends. Living in this house has seriously opened up my eyes to a lot of people and a lot of new things… I am quick to judge and that’s just me. And I'm not going to sit here and apologize for it, I'm not going to change but at least I've learned and I think matured from this entire experience.”

On Hoping to Find Love or Money
“I went into this game wanting to win money. And never in a million years I would think that it's a game for love. And my main focus was just winning the money.”