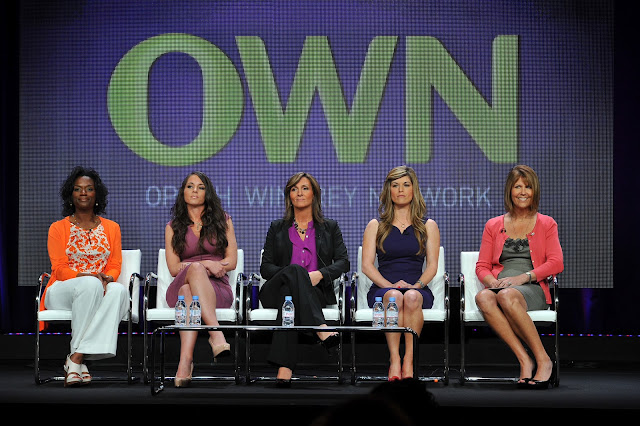 OWN: Oprah Winfrey Network
Each week we take a look around our pop culture world and try to find one moment that stood out as the most inspiring. It might be a celebrity who is doing charitable things, a TV shows that inspires us to be better or a philosophy that we should all strive to live by. Here is this week's most inspiring pop culture moment.
In a recent exclusive interview, we spoke with four of the stars of the new OWN series, Married to the Army: Alaska. While they struggle with single parenthood, disciplining their kids and battling depression, they find solace in each other. Yolanda Goins is the wife of Brigade Commander Colonel Morris Goins and as such, she is responsible for the spouses back at the base.
When we asked Yolanda about the bond of their sisterhood, she gave an inspiring answer that deserves to be presented without editing. This was her reply:

“Sisterhood is a very powerful word because there’s always power in unity. There’s strength in unity. We share a very unique experience. There are no other women in the world who have to stand flatfooted even though their knees are buckling and say farewell and send their husbands into harm’s way and so that, in itself, gives us a common bond. That gives us something that we all share, in spite of our differences.
“We’re all from different ethnicities, different geographical locations, different levels of education, different ranks, different believes, different strengths — all of that. But that one thing bonds us together. And so sisterhood is so powerful.
“I like to say that soldiers, they have an automatic fraternity. They have an automatic brotherhood because they take an oath. They say, ‘I will not leave a fallen soldier behind. I will leave no fallen soldier.’ And I like to push sisterhood amongst the ladies because we’re in this thing together. And especially living in Alaska, we are all that we have during this time. Sisterhood. Each other. And so the men say, ‘I will not leave a fallen soldier.’ And that’s our mantra as well. We will leave no spouse behind. We are in this together. And just like our soldiers, they do not kill one another. We will not kill one another either. We won’t kill each other with words and ugly looks and making you feel less than or anything of that nature, ostracizing you because you’re different. Or you know, ‘You’re not like us.’ We are a sisterhood.
“And that doesn’t mean that everything is always peaches and la-de-dah, Kumbaya and let’s join hands. It means we’re like family. We are a community of Army wives. We are a sisterhood of Army wives. And that means no matter what we have to face, we’re going to face it together and we’re going to get through this and I’m going to make sure you’re okay and I'm going to help you if you need it. That’s sisterhood.”
For more inspiring moments tune in to Married to the Army: Alaska when it premieres this fall on OWN.