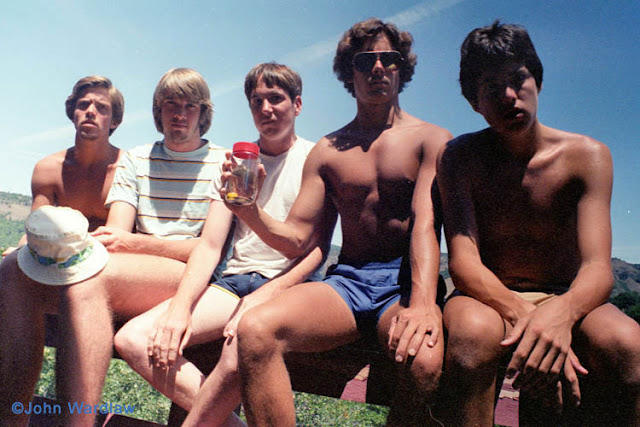 All photos courtesy of John Wardlaw

We all have those photos of ourselves in our heyday — carefree teenagers, hanging with our very best friends on a summer vacation. But these five guys turned a sunny snapshot into a lifelong project.

John “Wedge” Wardlaw, Mark Rumer, Dallas Burney, John “Belves” Molony and John “J.D.” Dickson took their first “official” photo together in 1982. Wedge’s family had a cabin on Copco Lake in northern California, and the buddies decided to grab a still to capture the moment in time. They never intended to turn it into a lifelong photo-essay. But that’s what it became.

The gang sat on a railing, while Belves clutches a Folgers Instant Coffee jar housing their pet cockroach. Mark has a bucket hat slung over his knee. They all rock “I’m too cool for this” teen snarls. And that was that. In a recent exclusive interview Wardlaw explained that they had no intention of posing that way in the future, saying, “We didn't even know all of us would make the trip together again.”

But five years later Wardlaw, who makes his living as a photographer, musician and filmmaker, suggested they recreate their iconic pose. After they did it again in 1992, the concept of making it a ritual was addressed. While they have strayed from the original pose and props slightly over time, the vibe is almost exactly the same. 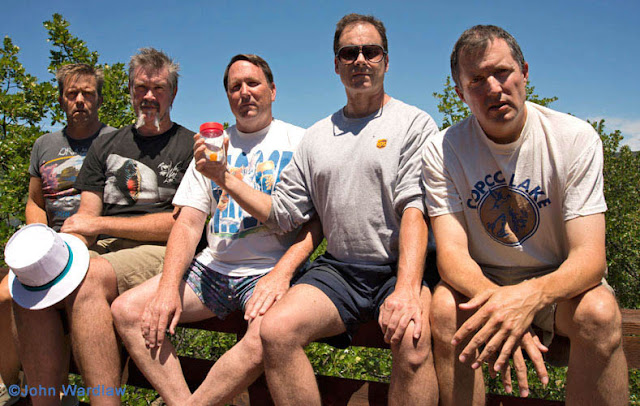 As for the essence of the guys themselves, Wedge said that they’re pretty much the same people they were 30 years ago. He remarked, “When you know us personally, the change is less noticeable.”

Still he conceded that physically, they’re showing the inevitable signs of growing up. He noted, “When you are just looking at differences in the hair and such, Mark [the second from the left] I think has changed the most. Different hair style and beard, plus being the youngest and having the most gray hair.”

And while they’re getting their fair share on Internet critiques, John defended his friends and photomates. “We have laughed at all the public comments from all the posts on us on the web. I think in person we all look pretty good for nearly 50. None of us have gone bald. But we all have the usual aches and pains you complain about when you age.”

Of course the nature of their friendships has also evolved over the years. Wedge recalled that back in ‘82, “I saw them nearly every day. We hung out together, we made movies together with a Super 8 camera. Though in 1982 I think Dallas had just joined the Air Force so we were not seeing him so much… John Dickson and I spent more time together in the early 80s. John “Belves” Molony and I were roommates in the mid ‘80s and I spent a lot of time with Mark in the late ‘80s too.”

Now they do their best to stay in touch, and the Five Year Photos project certainly helps. John acknowledged, “At different times we have all hung out in different aspects of our group. And there are other close friends who are not in the photo… More recently I've spent a lot more vacation time with Dallas at Copco Lake as he has made it there almost every trip. So I see Dallas more now. But it wasn't until the 2000’s that we slowly started to see each other less. Of course, things are different now that only John Dickson and I are in Santa Barbara and we all have different interests. But hanging out is still fun.”

And like so many people their teenage dreams and their current realities are a bit different than some of them might have expected. John talked about what they all wanted to be back in ’82 and where their paths took them. “John Dickson wanted to be an astronaut at one point, and all of us like astronomy. Now John runs a restaurant guide and Santa Barbara.com. John Molony was studying Geology at one point. I know he was really interested in that. Now he is a event and landscape photographer. I have never been able to explain what Mark does. Mark likes to build things from the ground up, and I mean like computers. That is what he liked and what he did. He is now semi retired. Don't know what Dallas wanted to do for sure, but after the Air Force he worked and got his teaching credentials and is now an elementary school teacher.”

At the core of it all when they do get together for their big photo ops, they may have different focuses but they’re just five guys who really seem to like each other. As Wedge observed, “We still have the same sense of humor. Most of us really like music and films. But it is our priorities that have changed. Back then it was all about vacation and fun. When is summer, that kind of thing. Now it's about paying off the mortgage, being happy with your wife or significant other, liking your job and of course still seeing you friends. 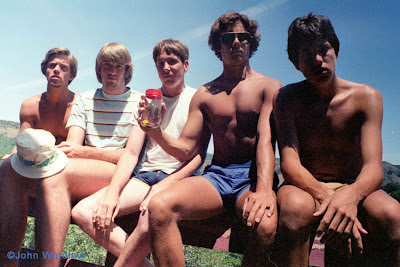