An Interview with Blake Jenner Winner of The Glee Project 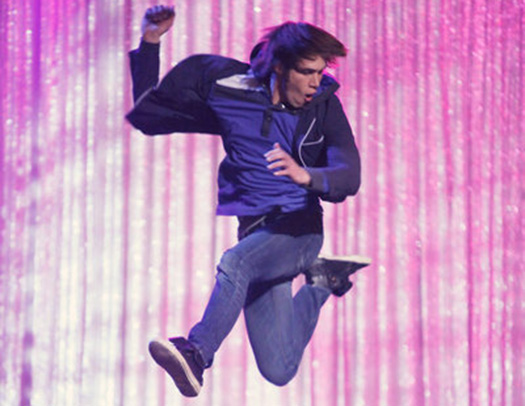 Last week Blake Jenner won The Glee Project, and we have to admit we were a little shocked. We had been assuming all season that Ryan Murphy, the creator of Glee, would choose Aylin Bayramoglu. After all he wanted a story that had not been told and Glee had not yet dealt with a girl with Muslim heritage growing up in the very American surroundings of Lima, Ohio. Not that Blake didn’t deserve to win, he’s handsome, charming and very talented. We just thought Ryan would use the opportunity to tell a different tale. But when Blake pulled out a poem during his last chance performance and cracked open his vulnerable side, clearly he won over all of the special guests in the audience as well as Murphy himself. And so it is Blake that will get a seven-episode storyline on next season’s Glee. In a recent conference call interview he talked about how it felt to win, what character he hopes to play and

On His Breakthrough Moment
“My biggest breakthrough moment on the show was ‘Actability.’ That’s my favorite episode of everything… We all did a great job as a unit getting the right emotions displayed. But, I think that ‘Actability’ is definitely a standout moment for me because I got to show my roots. Everybody else had studied music throughout their whole lives but I’d studied acting. So I got to show what I’ve been doing.”

The Hardest Challenge
“Two things were the hardest, slushies because it felt like you were getting slapped by a snowman in the face and it was crazy. It was so cold. When we’re getting slushied, I couldn’t feel the left side of my body. It was like the more I got slushied, the more I went numb and it was crazy and it hurt. But also, what was a little bit harder that I would take slushies over this, is the obstacle course. To some people it don’t look like much but the more we did it and with these sweat suits we were wearing, it was intense. I lost so much energy and by the time it was over I really felt like I was going to faint.”

On How It Felt to Win
“I honestly did not think I was going to win. I had fought until the end but I honestly thought that the two girls next to me, they had stories that you could see right when you look at them. Just by looking at them you’ll see their stories and you’ll see how their storylines could play out. Mine, you’d have to get in depth but I honestly thought they were going to win. I was getting ready to turn to them and hug them because I thought for sure they were going to win and when he said my name, I couldn’t even think because it was just like a dream come true. This is something that I’ve been working towards since my first acting class when I was really, really young.”

On What Ryan Murphy Saw in Him
“Ryan Murphy told me, ‘I enjoyed your leading man quality and your leadership.’ So I think Ryan saw that in me. He saw that Finn is leaving, and he doesn’t need a Finn number two, but he thought that they might need a branch of that. Maybe someone who has the same type of feel. He’s there for everyone. He might’ve seen that I would be able to do my best to adapt to anything, if they were to give me a script with a really heavy thing. If someone would have died or something really heavy is going on in my life, he saw — especially through “Actability” — that I would want to do that. I wouldn’t be afraid to embody any character that they would give me.”

On Who He Hopes to Play on Glee
“I hope that I can be that go-to-guy in the choir room that everybody can lean on if they’re feeling sad or they could vent to. But also a guy that would fight for their friends and really look out for them. [But] he also has emotions, too. He’s not perfect. He’s got skeletons in his closet that he’s just so used to getting into his self that he doesn’t have anyone to vent to. He just loves for people to vent to him but he has his own stuff going on. So you don’t know what’s going on at home, what his personal life is like and then eventually it comes out and you see that he is someone with faults and vulnerabilities and sometimes he just wants to be alone because he has things in his life that bother him. So I definitely would love to be that go-to-guy but with different levels but different from Finn. Not the same guy and I don’t think anybody could replace Finn."

On What He Learned from The Glee Project
“The most important thing that I took away from the whole experience, and this is something that I always told myself to keep in mind, but throughout this experience I actually used it was, definitely never to get negative and just go with the positive. Every week I just had faith. And no matter how bad things were getting or no matter how bad I was at certain points, if I was going through a hard time. I just had to stay focused and just stay positive. And believe in your mind and trust yourself as you’re doing each activity, like the homework assignment or the music video or even the last chance performance. Just trust yourself, trust your moves and just allow yourself to break through.”

Tune in next season when Blake Jenner joins the cast of Glee on Fox.

For related stories check out:
The Latest Glee Project Castoffs Ponder What Might Have Been
This Week's Inspirational Pop Culture Moment: Nellie Veitenheimer