Laura Mennell Is Part of the Syfy Family on Alphas 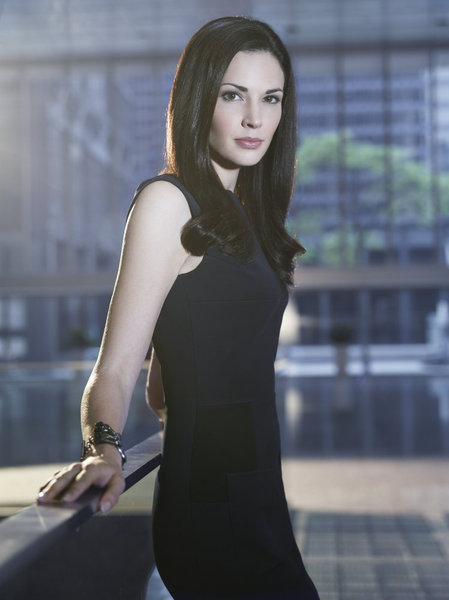 Laura Mennell seems to have a love affair going with Syfy. Not only is she the star of the network’s hit series Alphas, but she’s done quite a bit of work for the channel during her 14-year career. In fact one of her first gigs was an episode of Stargate SG-1 back in 1999.

In a recent conference call interview, the Canadian actress talked about her ongoing relationship with the network. “I love Syfy a lot. I have a lot of fun in it. You always get to do different things.”

Plus a lot of the channel’s series mount their productions in her own back yard in Vancouver, British Columbia. Laura continued, “We shoot a lot of Syfy series [in Vancouver] and a lot of Syfy movies. Watchmen was shot there. The 4400 was, Eureka, Smallville, you name it. They are all shot there so I was lucky enough to be a part of a lot of those.”

Laura discussed what she feels is the best part of working for Syfy, saying, “Things always change. You never get to do the same things. You get to live in these different worlds. Watchmen was an incredible film for me to be a part of, just this wonderful world being put in everyday and having crazy things to play with like a radioactive blue boyfriend. That was fun.”

But like every situation, she said filming all of the science fiction projects does have its drawbacks. “One of the trickier things is those green screens… You have to really use your imagination on those days as to what you’re seeing.”

Yet Laura seems to be up for a good challenge. She acknowledged that as Season 2 of Alphas unfolds, her character is going through a bit of an evolution. Laura’s alter ego Nina Theroux is part of a team led by Dr. Lee Rosen. But here’s the twist — all of the members of the crime-solving unit, known as Alphas, have super human abilities.

Nina has the power to make people do whatever she says. Laura described how her character has evolved throughout the course of the show. “Last year she was in a pretty good space. Nothing was perfect but her life was pretty much coming together. With Rosen’s therapy, she was working and had some walls up, but they were starting to come down. She was having relationships with her team. They were like a real family to her. She was having more of a purpose in her life.”

Laura added, “Then obviously with Rosen outing the Alpha phenomenon to the world and being institutionalized and taken away, things changed. The team disbanded and Nina pretty much lost everything that was important to her. She felt alone. Everything she worked for, getting her life back on track — it was all gone. So now she pretty much has this emptiness, this void that her pushing fills. It’s the only thing that really makes her feel good if only for a moment. So unfortunately it’s becoming more of an addiction.”

Luckily Laura has her Syfy family to fall back on . See how Nina handles the drama when Alphas airs on Monday nights at 10 p.m. EST/9 p.m. Central on Syfy.