Face Off’s McKenzie Westmore and Ve Neill on Past Contestants 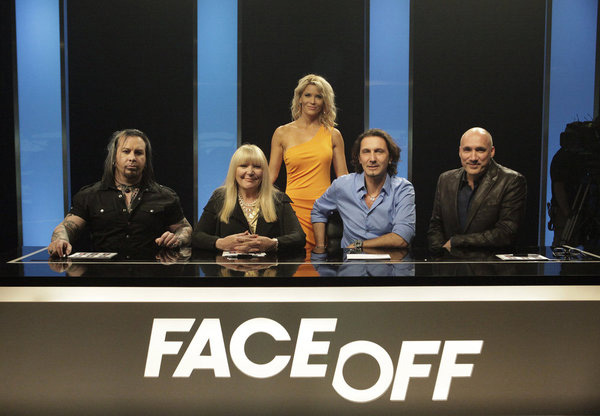 Season 3 of Face Off started last night with another set of hopeful special effect make-up artists vying for the top prize as a guest lecturer at the Make Up Forever Academy in New York and Paris, a car and $100,000 cash. But perhaps more importantly, the competitors get exposure in a world that’s hard to crack. The show has already helped the careers of some special effects make-up artists who appeared in the first two seasons. In a recent conference call interview, host McKenzie Westmore and judge Ve Neill talked about some of the success stories and gave advice for future contestants.

Season 1 winner Conor McCullagh was already a professional in the business when he decided to go on the show. He had worked on films like Shallow Hal and Jackass. But one thing Conor didn’t have until Face Off was a direct line to three-time Academy Award winner Ve Neill. Ve, who won Oscars for her work on Beetlejuice, Ed Wood and Mrs. Doubtfire, met Connor on the show. She stated, “Conner came and did The Hunger Games with me… I was actually hoping that he’d go on the second Hunger Games with me but I think I’m going to have to hire locally again, which is why he got hired the first time, because he was local in North Carolina.”

Ve talked about the value of being on Face Off, “It’s just such a wonderful opportunity for any of these artists to be able to stay in touch with us because we would love to be able to help them out eventually.” And she pointed out “They don’t even have to be the winner. I still talk to a lot of the guys. They come and do things at tradeshows with me and do demos and it’s really to see their progression and how they advanced since they’ve come off the show.”

McKenzie, whose father is the legendary Michael Westmore of Star Trek and Mask fame, said she, too, has a connection to one of the past contestant. “My dad actually hired Gage to do a Bollywood film this past year. He sent him over to India and had him make up the [actor] who’s considered like the George Clooney of India… It was really neat to see somebody like Gage, who wasn’t the winner but still an amazing talent. And a lot of people do continue to get great work after being seen on the show and after they are able to showcase their talent.

Ve added, “It really opens up a lot of doors for them… I’m so happy for the contestants because it’s such a great opportunity for them to advance their craft. So I’m really happy that the show has been able to do that for so many artists.”


So what does it take to get on the show? McKenzie explained, “They had to do a make-up on themselves and they also have to do an interview. I’ve seen a lot of the videos even on YouTube from some. It’s fun to watch some of them to see what they come up with and what they use and how they go about creating a make-up on themselves… They have to showcase their personality and they have to showcase their talent. It’s a full package.”

Ve and McKenzie also discussed how potential player can prepare for being on Face Off. They cautioned that the show is more than just the obvious. Ve said, “It’s really important that they know that it’s just not painting a face. You have to be able to run a group of people to actually get the makeup done. You have to know how to speak in a group of people. You have to know how to talk to them, not down to them, but to them. It’s something that I don’t think a lot of people [know], that have not been on the show especially because they’re working individually… You really see where people are going to have a weakness working on a team or working with a partner… Because it’s not a one man job. It’s teamwork.”

McKenzie had other advice for them as well, “Some of the ones that we see with a real strong sense of talent and a strong sense of person, a sense of who they are and what is their signature, are the ones that really have a good background in schooling… You need to study and it’s very important that these people do take the time to do some of the training and just study and to learn the craft because it’s business, it’s a craft. So to take that time to learn at any age, it doesn’t matter when, it’s a talent, it’s innate and it’s also learned and it’s within everybody.”

And Ve pointed out that to be successful on the show, you must be well rounded. “They have to start developing everything because, as you can see on the show, you pretty much have to know how to do it all. I’ve always said, ‘Oh my God if you put me on this show I’d probably flunk out the first week.’ I’ve never had to do every single one of those jobs. I’ve done them individually but I’ve never done them all at once. And it’s very difficult. You have to really be able to know how to roll with the punches, as it were, and you really have to know a little bit of everything now.”

The best part about the show as far as McKenzie is concerned is the interest it has created in the field. She said, “We do get a lot of fan letters that have a lot of either parents coming up to me and saying, ‘I’m so grateful for this show because my child, my 10-year-old, my teenager, now knows what they want to do. They want to go into the world of makeup.' Or even kids coming up saying that they love the show, that this is what they want to do. They found their calling. It really is amazing for us to see it on our end, all the workings of the show and what it brings out in the contestants.”

Watch Face Off on Tuesday nights at 9 p.m. EST/8 p.m. Central on Syfy.