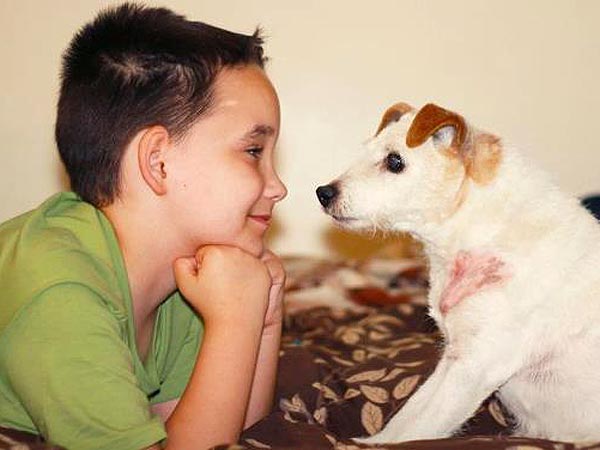 Although Cole Hein is not a famous movie or TV celebrity, he's a star in our eyes for the kind-hearted thing he is doing for his dog Bingo. Cole had an undiagnosed medical condition that made him sporadically stop breathing. And so in 2005, his family bought him Bingo, a service dog, whose soul job was to make sure Cole was breathing.

And Bingo has performed his task lovingly and unconditionally for seven years — saving Cole's life on several occasions. When his best friend stopped breathing, he barked until someone came and resuscitated the boy.

But now the tables have turned. Cole is healthier these days, but Bingo has been diagnosed with Cognitive Dysfunction Syndrome and vets say he may only live another few weeks. And so Cole has created Bingo's "Lick It List" — a bucket list for dogs. All the things they need to do together one last time before Bingo crosses the Rainbow Bridge.

The list includes, "I want to take her on one last public outing to Ruckers [recreation center]. I want to walk her around the block twice. And I want to get her treats from around the world."

That last part is where we all come in. Cole's family has set up a Facebook page so that friends from all over the globe can send their favorite dog treats to Cole and Bingo. The family is refusing financial donations, just bones, chews and canine-friendly snacks of kind so Bingo can enjoy his last days with a full belly. Join the campaign on Facebook or send you treats directly to Cole Hein/Bingo Hein, PO Box 413, Shilo, MB, Canada, R0K 2A0.