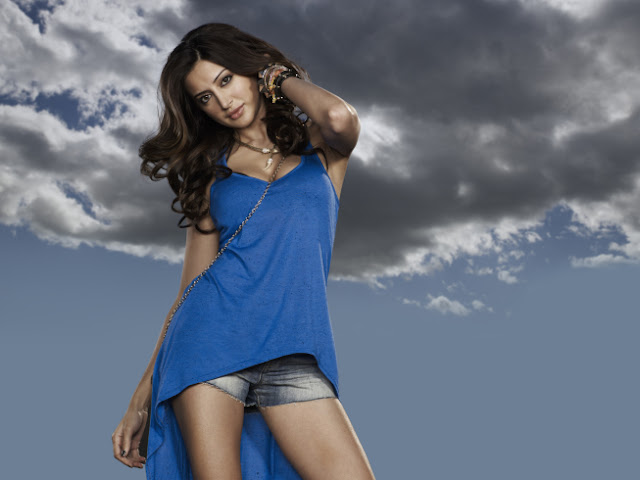 Given all of his antics throughout the last year, it’s hard to imagine that Charlie Sheen is pretty much the straight man on Anger Management. But as was the case on the The Bob Newhart Show in the ‘70s, the therapist can’t be the craziest person in the room. So as leader of a therapy group, Charlie had to be surrounded by a gang of patients who were a little off kilter. Enter Noureen DeWulf, who plays the oh-so-jealous Lacey.

Despite her eccentricities, Noureen is able to keep her character grounded. In a recent conference call interview she explained, “I try to keep a balance between hitting the joke and keeping her grounded. It's a precarious balance but it's a sitcom format. So that's what I do.”

The fact that she has such great characters with the other actors, who play Charlie’s patients, certainly doesn’t hurt. Noureen noted, “I adore every single member of our group therapy. Barry Corbin and I eat lunch together every day. It's such an unusual pairing… I love him. Derek [Richardson] and Michael [Boatman], I just couldn't say nicer things about them. Then, of course, Charlie leading our group… It's amazing because he is such a sitcom legend.”

Clearly the actress is enjoying her time on the show, but in the spirit of the series we asked her what got her hot under the collar in real life. She conceded, “I don't know what I can say to that because there's specific things that do, obviously, make me angry. Probably things I've been warned not to talk about like politics and religion.”

Besides, she doesn’t have a lot of time to dwell on the unpleasant give how busy she is with the show. She described the series’ unusual production schedule, “We don't follow the traditional sitcom format of shooting. Typically, you would get the table read on Monday and then you would rehearse Tuesday, Wednesday, Thursday — and Friday, shoot in front of a live audience. On our show we shoot one episode on Monday and Tuesday. We have a table read on Wednesday and we shoot the next episode on Thursday and Friday. So we're working twice as fast and we don't have a live studio audience.”

She continued, “It does provide a challenge to all of us actors because we do want to tell and nail these jokes at the same time. There's a certain confidence that it does build in you and a freshness that is pretty unique. So we all try to focus on that and just give it our all every day that's what we have to do.”

As a result of the schedule crunch, there isn’t a lot of practice before going in front of the cameras. Noureen acknowledged, “We don't really rehearse that much on our show. We shoot at such a rapid pace that we pretty much shoot the rehearsal. There is no rehearsal, essentially. We just shoot.”

The upside of that is the fact that the material doesn’t seem labored. Noureen remarked, “Everyone is just being very instinctual. It works the way they cast the show. The actors have shown that these characters exist inside of them. They've played similar things before or they're characters that we can all live with. We kind of just run with it.”

See Noureen and the cast in action when Anger Management airs on Thursday nights at 9:30 p.m. EST/8:30 Central on FX.

Bachelor Pad's David Mallet Has His Strategy Laid Out