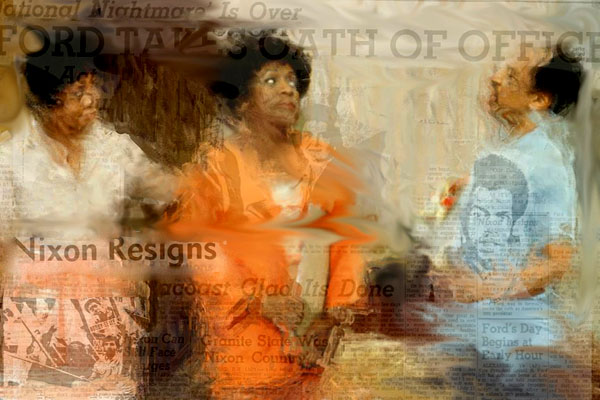 Our parents were both artists, so we were brought up to appreciate a good Monet. Our bedroom was decorated with Degas prints and we cried when we saw the Sistine Chapel in person. But nothing pleases us more than when two of our favorite worlds collide — art and television. So imagine how excited were were to discover mixed media artist Leah Devora’s Sitcom Series. Yes, you heard us. Leah has created works of art based on the best of the best ‘70s TV shows.

In a recent exclusive interview she admitted, “That [collection is] my favorite of all time.” We had found a kindred spirit. We spoke with her on the day that Ron Palillo (Welcome Back Kotter’s Arnold Horshack) died and broke the sad news to her. After recovering from the shock she told us, she had done a painting of that show.

She explained where the concept came from, “I grew up in the ‘70s. My whole life was ‘70s sitcoms… Most of the ‘70s [shows] were black culture and how dominant black culture was. They were very politically oriented, those shows. They were very hard hitting in a not so subtle way but yet it got the point out there. It’s not like today where everybody’s so politically correct. [My paintings are] all social commentaries, too.”

She continued, “That’s something nobody’s ever done before, was paint sitcoms, and I wanted to do something no one’s ever done before. And because I was so heavily influenced by that in my life I wanted to make that part of my painting series, so I did it. My favorite was The Good Times one and The Jeffersons. They all have the ‘70s political stuff like Nixon and Vietnam.”

But even before she tackled the TV sitcoms through art, Leah put another Hollywood era on canvas with works centering around stars like Marilyn Monroe, Marlene Dietrich and Audrey Hepburn. Eight years ago she started the ghosts of Hollywood series. She recalled, “I moved from San Francisco to Los Angeles. I was in a totally different mindset. I was not in the mood for L.A. I was not happy... But then I started looking at my neighborhood in Los Feliz. And that’s just such old Hollywood neighborhood, old energy there. I started picking up this weird, haunted energy. There’s a lot of spirit things buried underground in this town. They destroy things and bury them here. That’s a big L.A. thing... L.A.’s a creepy town to me and I started getting in to that. So that became my big inspiration was the creepiness of L.A.”


As she began the series she noticed a striking similarity in the stars of that era to the celebrities of today — just minus the Internet. “Back then it was all very eloquently written scandal sheets. I found them in books and old files in archives and I put them into the work… I like their concept of pop culture back then or their scandal sheets. I was just really into that.”

She noted, “Things haven’t changed that much. The only difference is the media we have now. So they weren’t in their faces. But they knew what was going on. There was as much drugs and sex as now but just not as exposed. So I wanted to show the irony in all that in artwork.”

So with all this old Hollywood glamour and retro ‘70s passion, we were a little shocked, but thrilled, by Leah’s selection when we asked which pop culture icon she would choose to be for one day. She replied, “Judge Judy. I love her. That’s me as an old lady. She’s so my grandmother, actually. She’s from Brooklyn. She’s got the whole New York thing. I’m not from New York, but half my family is New Yorkers. She just has that sensibility to her and I just love. I love her views on politics. She’s such an interesting figure because you wouldn’t think she’s so likeable. But she’s so in your face and direct. I would love to walk around and act the way she does and get away with it.”

Leah’s newest collection, “Voices — Dating in the Modern World,” an installation, which will show at the Papillion Art Institute on 1835 S. Main St. in downtown Los Angeles from January 5-19, 2013, is a social commentary on men and women and how they communicate. It features audio recordings, paintings using old-time personal ads from newspapers and an interactive component where viewers can share their thoughts on the subject. She is currently holding a Kickstarter campaign to fund the series. 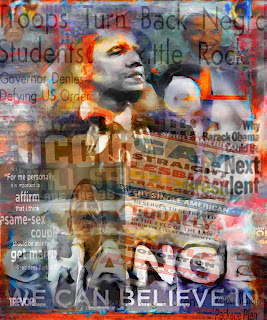 
She is also working on a series of Obama images. She began the series four years ago before he was President and has added to it through the years, layering on all the issues that he has dealt with during his administration like healthcare, the economy and gay marriage.


There's a Point to This Art