Cassie Steele on The L.A. Complex, Music and Edie Sedgwick 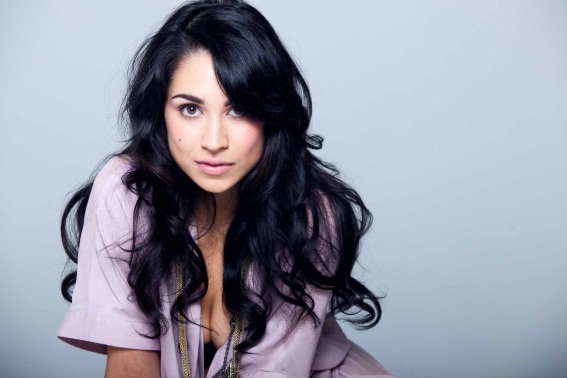 Cassie Steele, known best for playing Manny Santos on nine seasons of Degrassi: The Next Generation has grown up and moved on to the more adult role of Abby Vargas on the CW’s The L.A. Complex. On the show, Abby is a struggling actress who moves from Canada to Hollywood to pursue her dream. And although Cassie still lives in Toronto, the story mirrors her own life to a degree.

In a recent exclusive interview Cassie told us she differs from her character in some ways, but their struggles are the same. “Abby takes things really lightly. She jokes about her bad luck and she doesn’t let it affect her. I take things really hard personally… I really admire those kind of people that can do that and can take things lightly and don’t let it affect them in a negative way.”

But since she has been a singer and actress since first grade the 22-year-old can relate to Abby’s journey. She said they deal with a lot of the same issues such as “trying to afford everything without always working because it’s so on and off. Trying to stay on top of it and trying to also make friends. Because you come down here and you don’t really know anyone. And everyone out there is also trying to make it. So it gets really tough trying to balance your personal life, your work and keeping your sanity.”

Based on her own path and on what she learns from playing Abby, Cassie has advice for upcoming actors. “Although Abby has patches of bad luck, not everything is like that and keeping your chin up and keeping everything lightly would be the best advice that I wish I had heard when I was younger. Keeping light and staying driven and don’t let anything get you down because if you wear everything on your sleeves you’re not going to get a part. You have to keep that confidence and you have to keep that lightness and everything else that radiates in an audition.”


In addition to her acting career, Cassie is also a singer-songwriter. She began putting her lyrics to music in first grade and hasn’t stopped since. She is currently working on her third studio album. She attempted to categorize the music for us but stopped herself saying, “I’m not going to do that… I don’t want to say anything that would make it sound lame. It’s really hard to find that balance… it’s all pop nowadays. Hopefully it will be popular.”

She did tell us that she doesn’t really have specific musical influences. She stated, “I listen to a lot of interesting genres of music and I try to keep an open an ear. It’s really about what comes and not fighting what comes naturally to you. If you’re more inclined to soulful stuff while you’re trying to do screamo, well that’s opposite. So I think working with yourself and not fighting it will create the truest music, to yourself at least.”

Cassie does hope to go out on the road when her album is finished. She noted, “I haven’t been on tour for a really long time because of work and timing. I’m a perfectionist and when a lot of time goes by after I’ve written 20 songs and four months go by of filming it’s like, ‘Well those songs aren’t true anymore. Scratch ‘em.’ It’s like a never ending game. But I’m really very proud of the work I’m doing right now and hopefully when The L.A. Complex wraps I can make plans for a show or tour.”

It came as no surprise to us what Cassie said she is most passionate about. “It swivels between acting and writing music. That’s pretty much all I do. It’s all I really have time for and I really love doing it. So that’s my passion. And I’m really lucky to be doing both because a lot of people they want to do something and it just doesn’t happen and they end up getting into something else. So I’m actually very thankful that I’m living my dreams and will hopefully get somewhere with them.”

It did however, shock us a bit when we asked Cassie what pop culture icon she would like to be for a day and her answer was a relatively obscure fashion icon an socialite from the Warhol-era — Edie Sedgwick. “She was such a style icon and she had such a different life. The industry back in the day, they all had pretty similar troubles. I don’t know how old Edie Sedgwick was [when she died] but in her younger days she was delightful. She had a big closet and funny suits, funny in personality, not funny ha-ha. She’s just such a different lifestyle, so eclectic with the arts and fashion and she was just so much more in her history than I could ever hope for.”