The Latest Glee Project Castoffs Ponder What Might Have Been 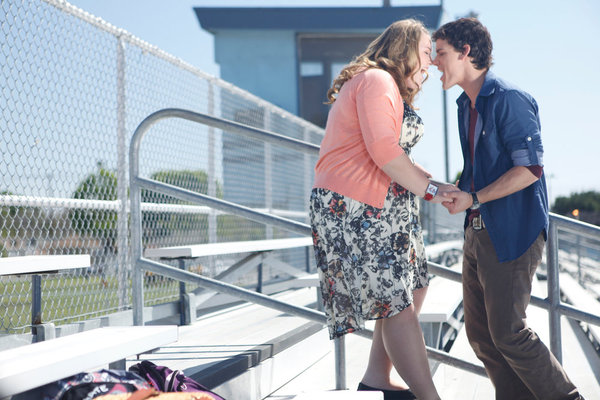 Photo by Tyler Golden/NBC
Last week on The Glee Project the judges surprised fans with a double elimination. While Michael Weisman seemed destined to be next on the chopping block, many were shocked when Lily Mae Harrington saw her name under his on the call back list. After being sent packing, the two castoffs talked about the show in a conference call interview.

Lily Mae, who landed in hot water more than once for talking back to the judges described what it was like to do Last Chance performances for Glee’s creator. “Ryan Murphy really pushed me in every single way possible — as a performer, mentally, emotionally — and I started out at call backs for him and the mentors on a really high level.”

She reflected on some of her sassier moments, saying, “At the beginning of the competition I didn’t exactly deliver what they wanted. And so I think they were still expecting that level of performance. And I freaked out a little bit at the beginning of the competition. It’s a really hard transition. So yeah, it was difficult every week. But I just took whatever he threw at me and I tried to tackle it as best as I could.”

Still the opportunities afforded the young hopefuls, didn’t elude Michael. He conceded, “I’ve never grown so much as an actor. I had some incredible experiences. I got to work on the set with [director] Erik White and got to release over ten professional music videos. So I feel like I expanded my acting chops exponentially. I’ve never had any experience like this.”

Besides the exposure, they both gained quite a bit more from their time on The Glee Project. Lily Mae admitted, “I personally took away a more sense of myself. Being able to really reach out and listen and it really opened my eyes. I come from a small town and a very non-diverse place. And living with so many different types of people and being in such a high stakes situation it’s really tested my will and my way and I have to thank everybody involved for that.”

Weisman also discovered an inner strength. He remarked, “I walked away with a newfound confidence in my performance abilities. I didn’t think that I had it in me to make it this far. And I know now that I can and I did and I’ll carry that with me.”

But if victory hadn’t eluded them, they would have had a character written just for them on one of TV’s hottest shows. They each discussed what their dream role would have been.
Michael revealed, “I’d love to play a character who’s really into school, takes grades seriously but is kind of like a closet intellectual and plays up a rebellious image and then finds his home with the New Directions where he can express himself fully.” But Lily confessed, “For me it changes every time I’m asked that question, because I constantly think of new funny ideas. But recently someone mentioned to me Sue Sylvester’s no fatties rule on the Cheerios team. So mainly I’d love to tackle a Cheerio and try to break her no fatties rule. We’ll see.”

It’s down to the final three — Blake Jenner, Aylin Bayramoglu and Ali Stroker. See who wins, when The Glee Project season finale on Tuesday, August 14 at 10 p.m. EST/9 p.m. Central on Oxygen.

For related stories check out:
A New Episode of Oprah's Lifeclass