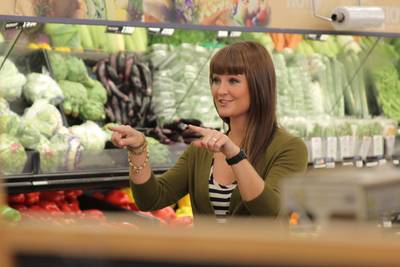 
Super Saver Showdown host Kristan Cunningham knows a thing or do about entertaining for a price. The "living beautifully on a budget” guru has appeared on every TV show imaginable — from Today to The Talk to Rachael Ray — doling out advice on do it yourself design. As she told us in a recent exclusive interview, “If something’s been stapled, glue gunned, cut down the middle and nailed back together, I’ve done it. Every material that’s out there, every cheap material, every kind of DIY project you can take on, I’ve done it.”

So she’s the perfect person to host and judge the new OWN series. In each episode two Super Savers guide one family each through two challenges. The first is a grocery store shopping throw down, which Kristan described. ‘“They get handed a binder about what the party they have to plan is about. And in 20 minutes they have to go through the grocery store and buy all the food essentials for the party. Whoever wins that round gets a week worth of free groceries for themselves and their family.”

From there, each Super Saver gets another $100 and 48 hours to plan a perfect event for their designated clan. The winner of this second head-to-head contest gets a $10,000 prize. Kristan acts as the show’s only judge so when it comes to what makes a flawless but cost effective soiree, there’s no one better to give some guidelines. When we spoke with her she gave some tips for how to throw the ultimate party on a budget.

1. DON’T BE CHEESY
“What I always tried to impress most on our Super Savers, on our contestants, was that a theme party can go very cheesy, very fast. And we all know this. We’ve all been to a very cheesy party. But the reason that that happens is that, and let’s take a luau for instance, is that people tend to focus on the elements that they’ve always seen created for that given scene.”

2. AVOID THE PARTY STORE
“And also people focus on buying the look. So people go to a party store and just buy everything with a luau theme — the grass skirts, the palm trees, what have you. The same way that you decorate your home, if you buy it all from some showroom on one sale it’s going to look cookie cutter and it’s going to look like a package. And the same is true of throwing a party. If you’re throwing a princess party for your daughter, and you go to a party store and you buy a whole Tinkerbell theme with matching plates and matching napkins, that’s going to look store bought… so you use the things you already have… That’s what our Super Savers prove week after week. Everything is either from the grocery store, from the homeowner’s home or from very limited sources like dollar stores.”

3. PICK A THEME THAT RESONATES
“The key is to pick a theme that truly resonates with your aesthetic, with what your family is like, with the story that you’re trying to tell. So you’re going to have more product available on hand. So for instance, my personal style is very vintage. Everything in my house is second hand, bought at a thrift store. I love me some patina. I never met a ding or a scratch or a watermark that I didn’t like. The look has a lot of history. So when I throw a party, whether they’re indoors or outdoors, I try to take as many things that make up that as possible — all of my tarnished pewter trays. I bring chairs and tables. I bring the chairs and stuff outside and try to make a nice mix of the two. The idea is to really utilize things that you already own, so that your look feels authentic because that is the key to not getting cheesy. It’s authenticity.”

4. KNOW YOUR LIMITATIONS
“You should only take on things that you know that you’re going to be successful in achieving. So if you can’t letter beautifully, if you’re not a great painter, don’t try to make handmade signs. That’s not the look that you’re going for. You always want things to look inherent to that particular style as opposed to just homemade because you were doing it on a budget. So I always said to the Super Savers, ‘Try to make things that look handcrafted, not homemade.’”

5. WATCH SUPER SAVER SHOWDOWN AND LEARN
“The thing that’s most important about the show is that these are real people, throwing real parties, with real attainable, achievable ideas and product. They’re doing everything from borrowing bleachers from the local church, calling in local favors from independent businesses to borrow goods. It’s very much a beg, borrow, steal situation.”

Pick up more budget-friendly party planning tips when Super Saver Showdown airs each week starting with the premiere on Friday, August 3 at 9 p.m. PST/8 p.m. Central on OWN.