Dylan Riley Snyder and His Bag of Tricks 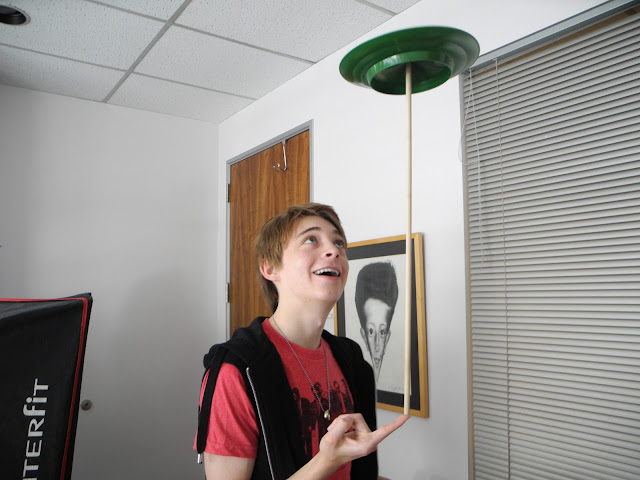 We do a lot of interviews, but last week we did one that was unlike any other. It's not every day you learn to spin plates. And that's just what happened when we sat down with Dylan Riley Snyder from Disney XD's Kickin' It.

The chat started out like any other interview with questions like, "How did you get started acting?" (he followed his sister to community theater) and "What was your first professional job?" (Tarzan on Broadway). But part way in, when we asked about his interests outside of acting, Dylan literally pulled out his bag of tricks. It contained, a Rubik's Cube, juggling apparatus, plate spinning gear and a yo-yo. And Dylan was off and running.

When he played young Tarzan at the age of nine, he appeared throughout the first act but was not in the second very much. So to pass the time, he picked up a Rubik's Cube. He told us, "I could just sit there and literally do it for hours." In his first attempt, on a train to New York, he solved the puzzle in three and half hours. His best time to date is one minute.

He solved it for us in less than 90 seconds — the last 15 with his eyes closed. He also made the cube checkered in just a few flicks of the wrist and made each side look like a flower with the opposite color's center square — tricks he's learned without the aid of Google. Watch him solve the cube here.


Dylan can also juggle and spin plates among a myriad of other tricks. We have a personal interest in the plate spinning. We often joke that because the Passionistas always have numerous projects going at once, whenever we feel overwhelmed keeping them all going, we pretend to spin air plates. And so we crossed another item off our Pop Culture Bucket List when Dylan taught us the art. While we couldn't quite get the plates going on our own, we were able to keep the ones spinning that he handed to us. That counts in our book.


But in case you're getting the impression Dylan is all fun and games, think again. He's also really smart. He's so smart, in fact, that his passion is engineering — aerospace in particular. He stated, "I've always wanted to work with NASA… I really like the job description. It's literally the term rocket science. I want to venture into that field at some point and in the next ten years if acting doesn't work out, it's my back-up plan. We'll see how it goes."

This studious side to his personality is the thing Dylan has most in common with his Kickin' It role. He plays Milton, the geeky martial arts student who struggles a bit with fitting in, except in the dojo. Dylan remarked, "I'm most like my character in that we both do enjoy school a lot. He enjoys it probably a little more than I do, but we both enjoy school. And we both get confidence from something we love doing. Me, it can be the academic study of science or acting. And him it's literally just karate. And we both get our fix from that."

Armed with this knowledge that Dylan likes to hit the books, it did not surprise us when we asked him which pop culture icon he would like to be for one day. He replied, "I'd want to be an insanely smart person like Einstein. I would want a genius. I just want to think what they're thinking, be in their mind state, see how they operate. How does their brain functions? That would be so cool."

He continued, "Einstein was so caught up in his thoughts that he would be walking home and pass his house. He would't be able to find his house from the others. They literally had to paint his door red so he wouldn't miss it I think that would be so cool to actually be that far in thought that you could do that. It's amazing." Spending time with Dylan made us wonder what color his Kickin' It dressing room door is.

Watch our entire interview with Dylan on our YouTube Channel.


The Cast of Kickin' It Talks About Their Characters