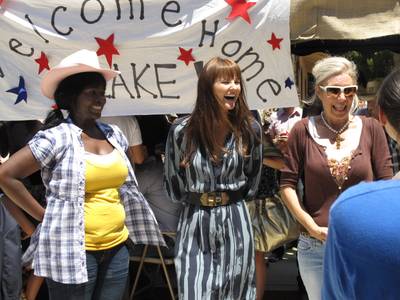 Photo by OWN: Oprah Winfrey Network

Thanks to reality TV, people who are looking for a bargain have been getting a bit of a bad rap lately. But Kristan Cummingham, the host of the new OWN series Super Saver Showdown, is hoping her show helps give couponers a good name once again.

In a recent exclusive interview she talked about some of the tips she’s picked up on her party planning on a budget show. Kristan remarked, “It was fun to watch every single week people who are stellar at what they do, really bring something to the table. And that’s what I said going in to it, ‘I want to learn something every week. I want to learn from the couponers but also as they put together these parties, I want to be blown away.’”

And that’s not an easy task. The TV host has been known for "living beautifully on a budget” for years and has hammered home the message on shows like Today and The Talk. Kristan acknowledged, “As somebody who has spent a decade trying to figure out everything that you can possibly make out of a sheet of MDF or something that you can take and recreate with some trim, I wanted to see what other people could do and bring to the table and what inspiring ideas they’d have.”

She was also thrilled to learn more about the couponing community. She noted, “What’s really important about Super Saver Showdown is it showcases the responsible and positive side of couponing. Now that couponing has become more mainstream, or at least something that the public is paying attention to, even people who don’t coupon are watching shows about it. But a little bit of light has been shone on the not so positive aspects. There’s the hoarding aspect.”

That will not be the case on her new series. Kristan revealed, “ When you meet couponers who take it very seriously and take the community of couponers very seriously, as our competitors do, we learn how many wonderful things this community really does.”

She gave a few examples of the sunnier side of clipping and saving. “For instance, I learned about coupon sharing. Which means that if you have a coupon and you’re at the grocery store and you realize that that coupon is about to expire and you can’t use it that trip, you basically place that coupon in front of the item that it corresponds with so that somebody else can enjoy the savings of your coupon. So you’re paying it forward and you’re gifting your coupon.”

Kristan discussed another good will gesture that a lot of couponers employ, “You also don’t do things like clear the shelf. You come to your local Albertsons for a specific cereal that’s on sale, you do not buy every single box because somebody might be driving from a half an hour away to get the same cereal.”

After all, as Kristan pointed out, everyone’s got their eyes on the same prize, “The goal is common — we all want to live cheaply, we all want to eat healthy and have a really nice life and we don’t want to break the bank to do it. And how can we all work a little bit harder to get to that goal? So again this show is a really, really wonderful showcase of the positive side of couponing.”

Tune in to learn these and other cost cutting tips to throw the perfect party — and watch contestants win $10,000 prizes each week. Super Saver Showdown airs on Friday nights at 9 p.m. PST/8 p.m. Central on OWN.