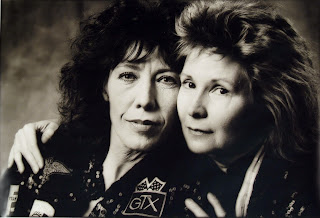 Lily Tomlin and Jane Wagner have been professional and personal life partners since they first met in the early ‘70s. Together they have created many iconic, award-winning projects, such as Lily Tomlin and Edith Ann TV specials and recordings, the Broadway shows, Appearing Nitely and The Search for Signs of Intelligent Life in the Universe, films like The Incredible Shrinking Woman and so much more.

They are now introducing their characters to a whole new generation of soon-to-be loyal followers by joining the tech revolution with City Adventures with Edith Ann, a iTunes mobile phone app for kids. The app consists of four different games — Snack Stack, aMAZing maze, Word Wall and Bug Rescue. Lily and Jane hope the product will be educational as well as fun.

In a recent interview, we asked Lily and Jane why a character they developed 40 years ago would appeal to kids today. Lily replied, “It depends on what we put in her mouth, I suppose. She’s still a kid and it depends on what subjects you undertake and how you express them.”

Jane added that "a lot of the things Edith Ann discusses are very contemporary topics, like art and politics. But, as Edith Ann always says, ‘The hardest part of being a kid is knowing you have your whole life ahead of you.’”

Lily continued, “Edith Ann is the kind of kid who doesn’t get up in your face, but she gets up in her own face. Some other cartoon character might find a bug and pull the wings off, instead of wondering what kind of bug it was. But Edith Ann would go to the bug dictionary and look up the bug.”

Jane likes to think of Edith Ann as a role model for smart kids who want to explore and be educated. Lily and Jane both hope families will enjoy it together. They likened it to the very first Edith Ann TV special. Lily recalled, “When we first did the animated show, we wanted the parents who grew up with Edith Ann to bring their kids to the animation.” And now they hope the same thing happens with the app, “We want the parents to become kids again as they might have been when Edith Ann was first invented and they grew up with her, for them to have the same wonderment that a six-year-old does. Through Edith Ann, we hope they can come back to the empathy that they lose as they become grown-ups. We thought it was a way that they would be able to experience that in a poetical way without being self-conscious about it. People grow up and become adults and lose their wonderment and idealism. They become cynical or jaded, where the kid might still believe that something very good could happen."

And while Lily and Jane have joined the world of social media, they like to reflect on the days when they connected with their fans the old-fashioned way — street theater. Lily recounted a time in the ‘70s when they were opening their first Broadway play, Appearing Nitely. At the time, their young fans were sleeping outside the theater overnight to get into the show. Lily dressed up as Mrs. Beasley in a Red Cross volunteer uniform and walked through the crowd, handing out donuts and coffee to her fans.

Lily recalled, “Mrs. Beasley would give them Kleenex to blow their noses. And she was watching out for them because she knew that Lily didn’t give a damn. She just luckily happened to be in the city when the box office opened so that she could help. She’s not a fan of Lily’s, but she is concerned about the young people.”

Lily and Jane did not set out to create some media stunt, but in the end that is exactly what happened. She stated, “Of course, it draws every press in town, so as a result you get all this publicity, but we really didn’t even have that in mind. We love street theater, and, in a way, Facebook is a kind of guerilla theater, too — it's not really produced, just kind of off-the-cuff expression, as direct as can be if you’re not there in person.”

Their relationship started in the ‘70s when mutual friends introduced them. Jane had just written her Peabody-Award winning teleplay, J.T. Lily said, “It was about a young kid in Harlem, like Edith Ann, living in a tough neighborhood. And when I saw it, I said, ‘Oh god, this is what I want for Edith Ann. She needs to be so much more than she was on Laugh-In, because she was doing one-liners on Laugh-In. She was good, she was cute and very popular, and that was great. But Jane was able to build more around her.”

And they certainly have done that and more. In addition to the app, Lily can he heard as the loveable Ms. Frizzle in the new DVD release of The Magic School Bus series, is currently on the Showtime series, Web Therapy and will premiere on ABC's Malibu Country in the fall. They are releasing a 25th anniversary edition of The Search for Signs of Intelligent Life in the Universe next month. Lily also just finished filming the new Tina Fey/Paul Rudd movie, Admission and is regularly touring the country doing live shows.

See what they have done with Edith Ann by downloading the City Adventures with Edith Ann app available on iTunes. Find out more about Lily and Jane on Facebook, Twitter and on their website, LilyTomlin.com.