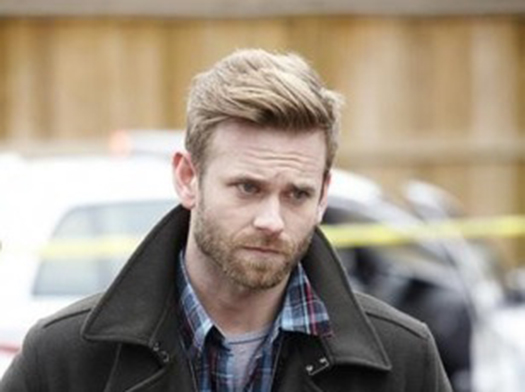 Tomorrow night the conclusion of a special two-part episode of Rookie Blue airs and features the return of Detective Luke Callaghan played by Eric Johnson. In a recent exclusive interview Eric told us Luke is back for the rest of the season. And he talked about the show, his co-stars and Jimmy Page.

On the Special Two-Part Episode of Rookie Blue
"Luke is coming back under probably some of the worst possible circumstances with Gail being potentially abducted by a serial killer and so there's not a worse way to come back to work than looking for a fellow officer who you're hoping to find alive. So this couldn't be a more tense and a worse way for him to come back. The good thing is he doesn't have to deal with his relationship right off the bat because everybody's so focused on getting Gail home safe and sound. So it's an easy way to walk around the elephant in the room.”

On His Favorite TV cops that Influenced His Portrayal of Luke
“When I was a little kid I loved the show Simon and Simon. Loved that show. I always wanted to play a cop. I've always wanted to be a cop. There was a period of time when I was ten years old where I thought being a cop would be really cool. So getting to actually go and play an officer was a huge thrill for me.”

On What Sets Rookie Blue Apart from Other Cop Shows
“If I had to describe it, I would say it's an emotional procedural. A whole last act of our show is not about catching the bad guy, it's about how the officers feel about it at the end of the day. So that's really what it gets into — the emotional life of the people doing the job. And while there are criminals, it is cops and robbers, it's really about how sometimes doing the right thing doesn't feel like the right thing at the end of the day. And that's what I loved about the pilot and that's what made the show so successful. You're really along for the struggle with five new fish out of water trying to learn what it means to be a good cop. Because it doesn't always mean what you think it means and sometimes you have to do the wrong thing to do the right thing. And there's all these varying shades of gray. So having them deal with that emotionally is what really's brought people to the show.”


On the Likable Cast
“It's a very likable cast. It's odd in a sense that we don't really have a lot of negatives on our show. We don't have the heavy that's in every episode, that’s really coming down on people. The job is the antagonist. The antagonist is trying to get through every day. So it ends up being a very likable cast and it's an easy way to spend an hour in the summer, watching these people because you like the characters.”

On Working with His Co-Stars
“Working on Rookie Blue has been fun but the whole thing that really sticks out for me is how much everybody cares about the show. Nobody's phoning it in. Even when the hours get long and people get tired, people aren't really going to take it out on each other and they're never willing to sacrifice the show for it. It's good people who care about their job and they're great at it. So the hardest thing about this job for me is that I didn't get to go every day. And that's a good thing, when you want to be there and do everything that you. It's a good feeling to have.”

On Which Pop Culture Icon He Would Like to Be for One Day
“I would have two choose a rock and roll person and be Jimmy Page for a day in 1973 playing California. That would be pretty incredible, a total rock star fantasy to indulge in that. Walking on the moon would have been a pretty good thing, to be Neil Armstrong. But I have to be honest, I'd rather be a rock star for a day. Twenty-four hours of rock god status.”

Brandy Norwood on Her New Album, Finding Her purpose and Whitney