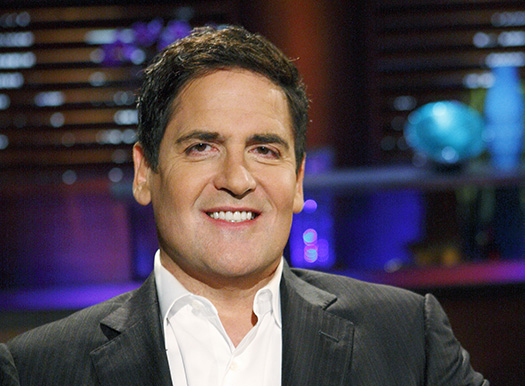 We got a chance to go on another set visit with the cast of Shark Tank this summer and it was just as much fun as the last time. If you're already a fan, get ready for a great full 22-episode season and if you haven't seen the show, we strongly urge you to take the plunge. It's truly fascinating to watch these real life business deals happen in real time, with real money. This year QVC queen Lori Greiner joins the panel of sharks full-time. By her side will be Robert Herjavec, Kevin O'Leary, Barbara Corcoran, Daymond John, Kevin Harrington and Mark Cuban. Each with their own strengths and investing personalities.

What we found most interesting this time was the various approaches the sharks take to deciding which business to put their money into. Surprisingly the Dallas Maverick's owner throws a little more caution to the wind than some of his fellow sharks. Maybe it's simply because he has more cash to play with, but he takes into consideration the potential of a business and an entrepreneur when making his choices. It's not just about the bottom line.

Unlike some of his fellow investors, Cuban does not just throw money at a company and send them on their merry way. He gets personally involved in each one and he uses the skills of one entrepreneur to help another in an area where they may not be as strong.

One of our favorite businesses from last season was Steve Gadlin, who's company, I Want to Draw a Cat for You, was considered a joke by most of the sharks. But Mark saw something in Steve, besides his nifty little cat dance, that the others didn't. He explained, "The reason I invested in him, wasn't so much because it was all about drawing cats, but because he was so creative and he was technical. So when you take creativity and a little bit of craziness and add some technical ability to it, not only has he been able to do the cat stuff and really built it up and pay me my money back, he's actually been able to help me with other businesses in terms of the technology."

So Cuban invested in Steve's abilities, not just the pitch. And Steve has helped Mark with other Shark Tank business by creating websites and coming up with ideas. Cuban added, "I wasn't really investing in him to draw cats, but that's worked out. It was more to get access to him for everything else."


It happens quite often that Mark sees the potential in a pitcher that no one else sees. He said, "That's usually the best deals, when everybody thinks I'm nuts. Those are the ones that turns out the best."

One such pitch was the Stephan Aarstol from Tower Paddle Boards. When this entrepreneur came into the tank no one was interested but Mark heard him out. In the end he realized, "He was great with Search Engine Optimization and he was in an incredibly hot area — stand up paddle boarding. And so I thought, 'Worst case I'm getting a great SEO guy, best case I get a great SEO guy and we make money.' And his business has gone from $18,000 a month to $200,000 a month. He's crushing it, crushing it. We can't even keep up with inventory. It's worked out really well."

Unlike some of the other sharks, whose only concern is the potential profit, Cuban considers the personal relationship. He stated, "The challenge when you do make an investment is making sure you connect with the entrepreneur and the people that work with them. And also to be able to contribute and help their business without being sucked in so much to the point where there's not enough hours in the day to do everything. And really that's our biggest challenge. How do you really, really help and be a great supportive investor beyond just your cash without overdoing it so you kill everything else around you?"

And it's that contribution that Cuban himself brings to the business that makes his consideration of a company different from some of his fellow investors. He noted, "We all value businesses differently, because it's what kind of value can you bring. Kevin is the most financial of the evaluators. He's just numbers, numbers, numbers. And I always crush him about it because I don't care what the value is today. I care about if I come in, what can I make the value and how does that relate to my investment?" He added that fellow shark Robert Herjavec thinks the same way. He said they both think, "Here's what I'm good at. Here's where I can add value. How big can I make this thing?"

And so what does Cuban do for fun? Apparently he doesn't. Other than some down time with family, he's always working. He admitted, "To me business is a sport. It's the ultimate competition and I like to play."

Watch Mark and the other sharks when Shark Tank returns on Friday, September 14 at 8 p.m. EST/7 p.m. Central on ABC.