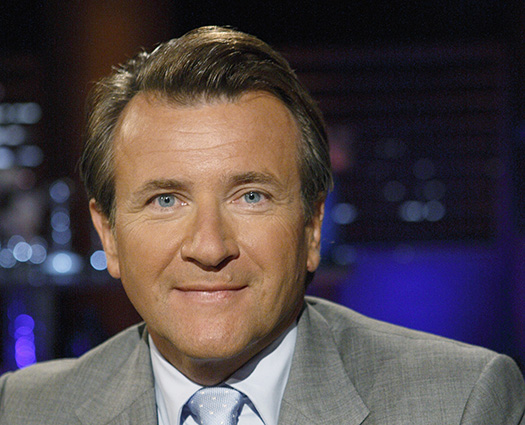 On Shark Tank, Robert Herjavec is the nice shark. He's always sympathetic, hates when Kevin O'Leary is too mean and has even teared up during a pitch. At a recent set visit to the Shark Tank, we talked to Robert about the American spirit, how he'd do as a pitcher in the tank and what makes a good investor. Here's want he had to say.

On the American Spirit
"We're all successful in our own way but we come to it at such a different cross section. Everybody that comes out there has a dream. Fundamentally the reason the show works is people want to be successful. I don't think anyone wakes up and says. 'I want my life to suck today.'"

On Sending the Wrong Message to the Pitchers
"People are coming out here and they have a dream and they've worked so hard to get here and sometimes we get on to the numbers, it's all about the money. And I always worry that the message we're sending out to people is to be successful you've got to worry about money. I don't think anybody ever started a great business because they wanted to make a little more cash. They had a dream. They wanted to better their life."

On What Makes a Good Investor
"A good investor is just not cash, it's being able to provide value. Because a lot of these businesses need to know which way they go. Do they zig? Do they zag? Which way do they go? And sometimes it's so frustrating when some of the other sharks who have no experience in my field come across and say, 'I know what to do,' and I'm like, 'No you don't.' And that's part of the problem is that sometimes we all get into the habit of thinking we know everything about everything."

On How He'd Fare in the Tank
"I don't know if I'd do well. I have a really hard time when people aren't polite and I find some of the sharks sometimes are a little rude to people. And I don't know if I would do well with that environment."


On Using Live Twitter During the Show
"It's unbelievable. It's remarkable now people really engage when we're doing it all the time… People tell me the reason they like the live tweeting is they feel like they are sitting next to me and watching the show. It's the ultimate behind the scenes as its happening on TV."

On the Drama in the Tank Being Real
"We're not trying to make TV. I gotta tell you... I'm really, really into it and trying to get the investment."

On What He's Afraid Of
"I think there's unlimited opportunity. The only thing I fear is the stuff I can't control in life — health, running out of time, that kind of stuff. But you're going to make mistakes and you're going to keep going."

On Getting Excited About a Deal
"The problem is I get too excited and I can always see Mark knows when I'm excited. So I try to make a conscious effort not to move. I would not be a good poker player."

For related stories check out:
Shark Tanks' Mark Cuban Invests in the Person, Not the Idea

Lori Greiner Takes a Dip in the Shark Tank