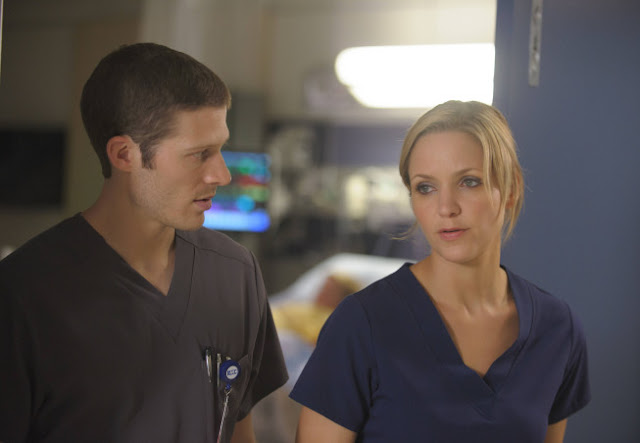 On the new Fox drama The Mob Doctor, Zach Gilford plays Dr. Brett Robinson. He is dating Dr. Grace Devlin (played by Jordana Spiro) who, unknown to him, is indebted to the Chicago mob. To pay off her brother's gambling debt she has promised medical aide to the syndicated crime family and ends up operating in back rooms, treating fugitives and more.

Grace is hiding her involvement with the mob from Brett to protect him. But because they are both doctors, the fact that she's disappearing for chunks of time or being called away doesn't seem odd to him in the beginning. In a recent conference call interview Gilford commented, "As surgeons you're always running away. There's a patient. [There's] something's happening, you have to go deal with and so you can never count on any time together, really."

He continued, "[It] plays into why she's able to lead this double life, because if she's always running off, getting a page or a phone call that she has to be somewhere else. No one really thinks twice about it, because it's what happens with surgeons."

And while their crazy schedules in the hospital makes this deception a little easier to pull off, over time Brett does get suspicious that something is going on. Gilford stated, "Eventually down the line, it just starts getting a little shadier and gutsier… Obviously I have no clue that she's involved with the mob in any way, but I start being very skeptical and being like, 'There's something you're holding back on me and if you're not going to at least be honest with me, then what's the point?'"

As for his working relationship with his co-star he remarked, "We have a lot of fun together. We both have similar work ethics where we take it seriously but we also have fun with it. We're not those kind of actors who need to go in a corner and have complete silence or anything like that. We're both collaborative and we like to like go with what the other person is doing and not just show up and be like, 'I've decided that it's going to happen this way.'"

He noted that the actress's down-to-earth attitude is what makes her good at her The Mob Doctor role. "It like plays into how she can play this part, because, she's a normal, like we get down with the guys kind of girl and I think that's very important for a part like this, because she needs to have an edge and can't just be this pretty girl, who then pretends to be in that world."