The Cast of The New Normal Talk About the Show 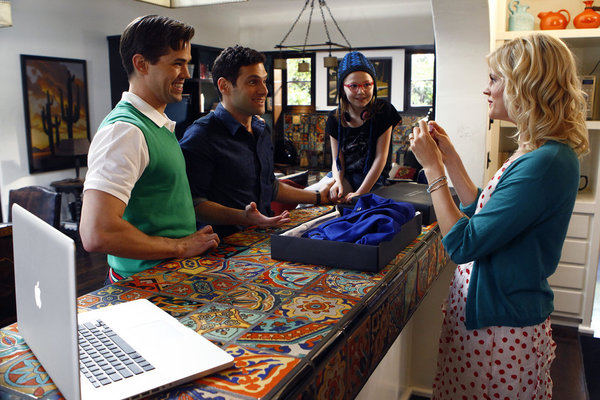 The New Normal premiered last week and we just have one question to ask — what was all the fuss about? What was with the station banning the offensive content and people up in arms about showing a gay couple on TV. Is it just us or is this topic old hat? We’ve had same-sex couples on TV for decades and at least in more recent years, very accpted on mainstream shows like Modern Family and Brothers & Sisters. Ryan Murphy (Glee, American Horror Story, Nip/Tuck) has done it again and brought us a heartwarming yet funny look into a non-traditional world. In a recent conference call interview, we spoke to the show’s stars Georgia King, Justin Bartha and Andrew Rannells about Ryan, their co-stars and what it means to be a family.

Andrew pointed out that the characters on The New Normal could be anyone’s relatives, “The family that we're creating is perhaps no different than yours…. It's a group of unlikely folks that come together to create this family and it might seem awfully different than a lot of peoples families. It might seem a little specific but I think that the story we're telling is really universal and my hope is that people will see themselves in the story.”

Georgia added, “I would like the story to remind people how beautiful, no matter what your family is, how absolutely wonderful and beautiful it is to have family and have connection and have unity and very much love. And it's so important of our story, it's just quite funny if anything because there's so much controversy and so much negativity. So it's really because it's really a very positive story.”

And with all the controversy swrling around the series, there’s one point that seems to get lost in the shuffle, “The show is a comedy,” Andrew pointed out. He continued, “We've been talking a lot about what it means politically or what it means socially but it's still just a really funny show about family and about these relationships. And so I was really attracted to initially the story but also by the humor of it. I really fell in love with.”


Aside from the gay couple, the other aspect of the story causing a commotion is the issue of suggorgacy. Georgia’s character Goldie has offered to be a surrogate to Andrew and Justin’s couple, Bryan and David. Georgia remarked, “I'm really surprised and I have to say there is one thing I really was disgusted by was how many people have alleged comments about how they really think it's disgusting and it's wrong and it's mind shocking and it's absolutely against nature. I want to shake anyone that says that and shake you up with the times because nature is rapidly changing always… I have so much, so much respect for anyone who would be willing to carry a baby for someone and enable a couple to have a family. That's one of the most selfless, wonderful things you could do for somebody and it's so generous. I really do admire anyone who's a surrogate.”

But despite all the controversy, there is one main thing that drew all three actors to the show in the first place. Justin states, “The reason why we all signed up for this if I could speak for everyone is Ryan Murphy — and Ali Adler, the co-creator… [They] really explore the depth of each character in this show and make them extremely indelible. So that you can really fall in love with each character separately and they become necessary to each other. And when you continue watching the show, you know, what we're trying to do is make this a very real family. And the family that you're going to want to sit down and watch every week and laugh with them and cry with them and feel with them and go on a journey of starting a family with.”

Georgia added, “I don't know if there is anyone like Ryan in the world… He's got a wonderful reputation for not being huggy and fake and very, very supportive and personally I love that. I absolutely love that he's candid and so clear in his ideas and what he wants to see and I'm very, very happy when he's directing… I feel so very, very safe with Ryan.”

The actors also had high praise for their other co-stars. Ellen Barkin plays Goldie’s grandmother Jane, a right-wing, bigot, who is unaccepting of anyone who isn’t just like her. Andrew talked about being constantly taken aback by the lines that come out of her mouth, “We do these table reads of new scripts and everyone, including Ellen, is surprised with the new way our writers come up with ways to be shocking. She has some incredibly offensive and hilarious things to say.”

Georgia added, “The variation and length to which they found ways for Jane to express herself is quite extraordinary. I've been crying with laughter at table reads at just how far they can push our characters. [It] is such a treat. And Ellen is wonderful.”

NeNe Leakes from The Real Housewives of Atlanta fame, plays Bryan’s outspoken assistant. She is a foil for Ellen’s Jane and the two feed of each other with ease. Justin noted, “They’re just such ballsy, funny, fearless women and it's really fantastic experience to see them on set. And NeNe is new at the acting thing but she's obviously a natural and her sassiness takes her a long way.”

But the breakout star of the show could very well be Bebe Wood, who plays Goldie’s eight-year-old daughter, Shania. Adnres commented, “A special mention needs to go out to Bebe Wood because that little girl routinely surprises and delights all of us on that set with what she does on the show. She's such a unique and lovely, lovely little girl. She's so much fun to have around.”