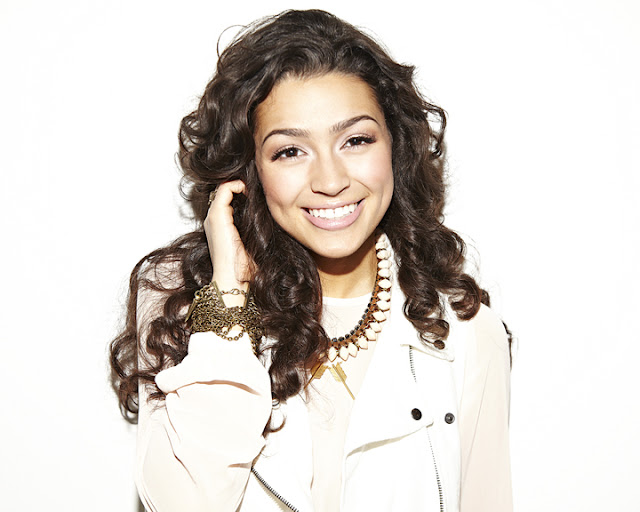 Alex Steele was just a six-year-old girl when she played Angela Jeremiah on Degrassi: The Next Generation. Her 12-year-old sister, Cassie, was also on the show playing Manny Santos. Cassie stayed with the series through 2010, but Alex left after five seasons. Now Alex is back playing a different part on the same show. In a recent exclusive interview she talked about her new role, Tori Santamaria, gave advice for young actors and revealed the pop culture icon she would want to be for one day.

Alex credits her sister Cassie for getting her into show business in the first place. "My sister really loved acting from a young age and my dad really encouraged me to try it and I ended up liking it." So she joined the cast of Degrassi: The Next Generation in 2001.

After five season she left the series and the business. She said she just wanted to be a kid for w while. But the break gave the opportunity to step back and realize acting was her true passion. And so she began auditioning again. She was cast, for a second time, on Degrassi: The Next Generation, to play Tori Santamaria.

She explained how the two roles differ. "Angela was a little girl and she was very into playing with Barbies, running around eating, always trying to get her step brother to play with her, stuff like that. And Tori is a much more mature character than Angela was. She's grade nine, a little superficial sometimes but does care about her friends, loves shopping, loves everything pink and sparkly. I relate a bit more with Angela, because I'm more carefree than Tori is."

But she does have some similarities to her new Degrassi character. "I'm like Tori in the way that I call my friends a lot and I really do love shopping. And I differ from her in the way that she usually always speaks her mind, she never really has a filter… I do take the time to think more about what I say before I say it."


Alex offered up some advice for young people who want to start acting. "It's really a life choice. If you really want to do it, you have to be able to commit 100% of the time." She continued, "Don't ever doubt yourself. You can't doubt yourself otherwise it will just hurt you in the end. Always be positive and always try your hardest."

Alex, who studied improv at a younger age also suggests all upcoming actors should try an improv class. "It helps you open up creatively,to looking at scripts and even when you're on set with other people you're definitely more open to them and it enables you to connect with them easier. Definitely something you should check out if you want to become an actor."

So it's no surprise that she names acting as her biggest passion, but she has other interests as well. "Personally I really, really, really do love acting. It's actually one of my biggest pastimes. I'm always watching movies, always trying to see actors, always going to acting class. On a bit of a more relaxed level, art. I really love  art."

And since acting is her passion it made sense that she picked on the greatest as the pop culture icon she would most lie to be for one day. "I would choose Audrey Hepburn because she seems like such a graceful, beautiful human being. And just being her for one day would be so amazing."

Watch Degrassi: The Next Generation on Friday nights at 6 p.m. EST/5 p.m. Central on TeenNick.


Cassie Steele on The LA Complex, Music and Edie Sedgwick


Dylan Riley Snyder and His Bag of Tricks