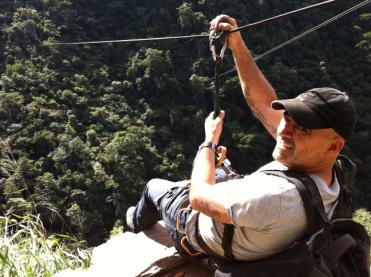 Next time you want to wake up to some motivating thoughts, start by brewing up a pot of Todd Carmichael’s La Colombe java. The coffee magnate and adventurer travels the globe in search of the perfect bean. Often putting his own life at risk, he deals directly with local farmers to bring the best brew back to the states. In a recent exclusive interview he talked about what he hopes viewers take away from his new series Dangerous Grounds, which premieres on November 5 on Travel Channel.

Todd ackowledged, “The over arching thing that I would like people to learn about the planet, is that it’s not a small world. It’s a huge, huge, huge world. We just think it’s small. There are so many corners, so many areas that are really undiscovered and are unrecognized that people aren’t even aware of.  It’s a massive world. And a huge, big swath of that huge world is coffee growing territory. And by people watching just a guy looking for coffee, overall they’re going to realize, ‘Wow, the planet is a big place.’”

Fans will certainly get that sense when they watch Todd travel to far off destinations like Haiti, Madagascar and Bolvia on the series. He remarked, “There are different ranges that get no attention simply because they’re hard to get to. And I say to myself, ‘Well that’s where I want to go then. Let’s go there.’ Because I think, ‘If no one’s able to get out there, I’ve got the lay of the land, which is kind of true.’”

Once there, Todd has a way of connecting with the locals. He recounted, “The relationship I can create with that farmer is so profound after. It’s all about relationship building. I’m able to offer him something, I shouldn’t say him because mostly it’s women, offer them market price that’s higher. I can offer them profits. But I can also offer them security year after year.”

That’s part of the reason Todd continues to do what he does. But Todd’s also discovered some things about himself on the journies. He confessed, “What I learn every single time I leave home is just how much I enjoy spending time with me family. Every minute is a reminder. I’m doing this because it’s important work. I’m doing it because it affects people’s lives. I’m doing it because it actually creates coffee that actually keeps a company going that’s feeding 150 families who are my employees.”

See how Todd Carmichael maximizes his time when Dangerous Grounds debuts on November 5 at 10 p.m. EST/9 p.m. Central on Travel Channel. And visit the La Colombe Torrefaction website to learn more about his coffee empire.