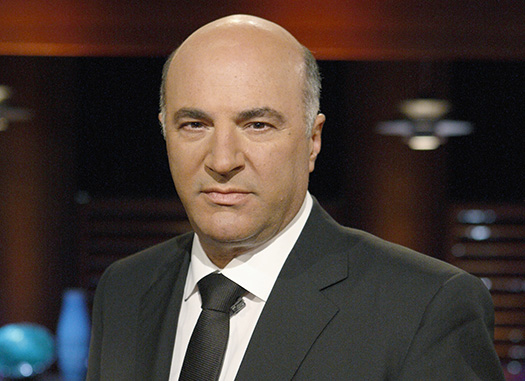 At our recent set visit to the Shark Tank, we sat down with all the sharks and talked about the show. We admit being a little intimidated at the thought of meeting Kevin O'Leary, the meanest shark in the tank. He's the investor who focuses intensely on a company's valuation, only cares about the bottom line and speaks what's on his mind, no mater whose feelings he may trample along the way. But instead of a scary, out of control madman, we found Kevin to be mild mannered and a little charming. Sure, he had many opinions and was not afraid to express them, but it's clear after talking to him why he is one of the most successful businessmen on the planet.

On Shark Tanks' Popularity
"I think the show, realistically was on the bubble until now. And then it had the tipping point. It owns Friday night. I think what's very cool about it, it's becoming the American Idol of venture capital. You can launch a product on here. How can you not feel good about a 13-year-old wanting to be an entrepreneur in America? That's what we're showing boys and girls. I love it when they come up to me in the airport and say, 'I want to be an entrepreneur' 'Why?' 'Because I saw it on Shark Tank and I want to be free.' And to me that is visceral and it's great."

On Why He's Called Mr. Wonderful
"There's a reason people call me Mr. Wonderful. Because I tell the truth and the truth sometimes hurts but it's still the truth. I look at it this way. I prefer deals where I have control, 51%. And I give the entrepreneur anything they want in terms of setting the metrics. And what matters is, 'Tell me what you're going to do in the next year, year and a half. Put some milestones out there. If you reach them you stay running the business. If you don't, I whack you and I put somebody else in place because they still own their stock and I want to get my money back."

On Motivating Entrepreneurs
"I'm here to make money, not friends. If you want friends, buy a dog. You don't have to sit around singing Kumbaya. It's a vicious, competitive world out there. What I believe is you invest in a business and you charter that management team to get up in the morning and pour boiling oil on their competitors. Business is war. You want to kill the competitor… You need to motivate the entrepreneur to get up in the morning and win and make money. That's why they're there."


On Advice for Winning Pitches
"It's so simple. If you look at the deals that have actually got done in this tank, now over three and a half years, it's always the ones that can articulate the opportunity in 90 seconds or less. Always, 100% of the time."

On a Shark Tank Success Story
"Talbott Teas is an example of what Shark Tank does best… I loved it because I love deals with sales. So his story was, 'I exploded on the scene. Teas are growing in America, a 5% growth rate. I'm going to get share and I have revenue… So I put $275,000 up to get 35% of the business. Because of the platform, because of the buzz Shark Tank created, along comes Jamba Juice and buys the thing right out from under us."

On the Power of Shark Tank
"I don't know if you remember the deal called Voyage-Air Guitar. This is remarkable. He's been in the tank twice asking for a million bucks. I wanted to invest in that but not in the guitar company just in the technology because I'm a guitar player. So I looked at it and said to myself, 'Would a big guitar company get 5 to 10% more sales if they licensed the hinge? Because everybody like me wants to travel.' And so now because of the platform I could call up Fender and said to them 'Listen, I have a belief this might work. You know Shark Tank?' He says,'Oh yeah, we watch the show. You got something for us?' We're right in the boardroom with the CEO and the head of marketing. We're going there soon. They're going to look to the guitar. I said to the [Voyage-Air owner Jeff Cohen], 'I'll give you the million bucks if we get a deal with Fender. I don't want to invest in your guitar company. I want to invest in the hinge.' I finally beat sense into this guy and now because of Shark Tank we're going to get that opportunity."

For related stories check out:
Shark Tanks' Mark Cuban Invests in the Person, Not the Idea
Shark Tank's Robert Herjavec on the American Spirit