Contestants from The Voice Discuss the Difficult Battle Rounds 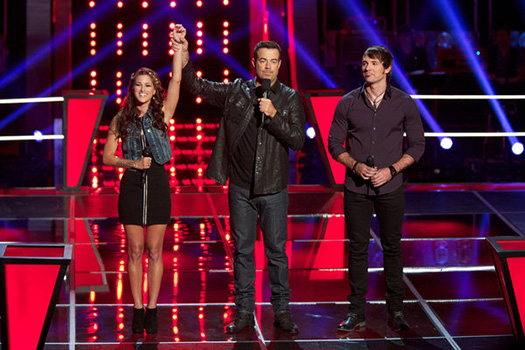 This Battle Rounds on The Voice just ended and the field has been narrowed from 64 to 40 singers. As on seasons past, two team members, who have grown to become friends, must face off head-to-head singing a duet. One will move on and the other is sent home. In a recent conference call interview some of the contestants talked about how difficult the Battle Rounds are.

Cassadee Pope, the 23-year-old from West Palm Beach, Florida, who is on Team Blake, won her battle against Ryan Jirovec. She said, “Watching the show is a totally different experience than being in it. I always thought the Battle Rounds were really entertaining and it's pretty fun to watch, but being in it, it's a whole different thing. It turns competitive and it's super weird.” She added, “Both of you need to go up there and sound great together and that's just beneficial to you both.”

But it’s not that simple. Both singers need to shine individually while at the same time trying to blend as a duet. And in the end a player is eliminated (unless a coach saves them with a steal.) Nicole Nelson, the 34 year-old from Burlington, Vermont, who won her battle round against Brandon Mahone, pointed out, “As things progress on the show… you're eliminating another person every time you perform and it's somebody who really wants to be there and deserves to be there often, and that feeling is really hard to shake.”

She continued, “It becomes a mental game of just trying to get it out of your head about the fact that you're on a television show which so happens to be a singing competition, which is so bizarre, and just let it be about the music. The mental game of that took up most of my time. Preparation, this is 90 seconds. I'm used to doing a whole night of music and so it's not a lot of preparation going into the actual music part. It's the mental game. It's getting all of the extraneous thoughts out of the head and just being able to perform. And as the show progresses, that gets harder.”


She said that watching her competitor go home was extremely difficult. “Brandon is so talented and from the very beginning he was one of my favorites. When I heard his audition I was pretty blown away by his taste and style as this 17-year-old kid. That's so rare. And it really was heartbreaking beyond what you could even imagine. Before I got on stage I was crying my eyes out and after I got off I had jumped up and down for a second and then I saw his mom and I started crying.”

Nicole said even after the evening is over, the results don’t entirely register. “The whole next day you can't believe the fact that somebody, seems like their dreams just came to end. It's silly to think that a 17-year-old would think that their dreams have come to end when they've just been like on a television that millions of people watch. It's really a launching pad. It's not sad at any point really, but the perspective gets swayed when you're in it. Brandon is going to have a wonderful career, if that's what he wants, and this is just really a way to get him going on a grand scale. But in the moment, you're trying to win, quote, unquote, and so when you don't, it's very sad and it was hard for me to deal with that aspect of it.”

Loren Allred, the 22-year-old from Salt Lake City Utah, who sings on Team Adam agreed with Nicole about the difficulty of seeing a fellow teammate eliminated. “I was lucky enough to be paired with Bryan [Keith] who from the beginning we had a mutual respect for each other. There was no cattiness and it was just let's just make this duet the best duet it can be and then it's up to them who they want… We just need to make it the best that it can be without, like grabbing at each other's throats trying to win. That's cheating the audience on the performance that they should be able to get.”

She added, “But when that moment comes and the enjoyment of singing with each other ends, it's really hard to let that excitement soak in that you have won when also your friend is being sent home. And he has the cutest little kids and just seeing their faces it's really hard. You can't really be fully excited for yourself. But yes, he's such a good sport. And I really, really loved my time and performing with him.”

Watch The Voice on Monday and Tuesday nights at 8 p.m. EST/7 p.m. Central on NBC.