The Stars of the Dead Files Talk About Believing 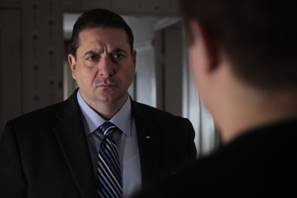 Each week on the Travel Channel show “The Dead Files” retired New York Police Department Homicide Detective Steve DiSchiavi and medium Amy Allan work with clients to solve unusual cases. He examines the cold hard facts and she gets in touch with spirits and together they solve the mystery.

In a recent exclusive interview they talked about what drew them to the series. As Amy noted, “They were wiling to do it the right way with honesty and integrity… to take that leap of faith and let me do what I do, how I do it without any prior knowledge. And they are willing to let us do our thing the way that we know how to do that.” Steve agreed, “And that was a big chance they took.”

Of course the producers hired the best. Amy started having experiences when she was four years old. She recounted, “The house I lived in in Lakewood, Colorado had a dead boy in the closet, a dead woman who had committed suicide wandering throughout the house and then a shadow figure outside, who would creep around the house. It was my every day life.”

She admitted that she didn’t really understand what was happening until she was a little older. She recounted, “I always read about it and talked about it and always interviewed other people about their experiences my whole life. But as far as really delving into it, trying to utilize my abilities it was my late teens, early ‘20s.”

For his part, the tough as nails NYPD detective has never had a personal paranormal encounter, but that doesn’t mean he wasn’t a believer. He remarked, “I was more of a skeptic of people. I was always open minded about paranormal stuff. When you got someone walking up to you and saying, ‘I’ve got pink elephants flying over my head.’ You go, ‘Okay, nut, walk away.’”

Steve continued, “I have learned that people do have legitimate issues and do see things and are going through special situations so I have changed drastically how I feel about physical mediums obviously. I didn’t even know what one was before I met Amy and I didn’t have much faith in psychics. I’m still a skeptic of people not so much paranormals of people like Amy with abilities like that.”

Amy also has a learned an important lesson the show. She conceded, “Mine is having patience and understanding and compassion for the living as well as the dead.” Steve laughed, “Yeah, she gets annoyed with the living.”

As for what he’s learned, Steve acknowledged, “Mine is trying to remain open minded and not be the skeptical, New York detective. I ask questions now that I would never have asked in the first season. Not so much for the client, it may sound funny me saying that, it’s more so, I know what Amy’s going to want to know. And I ask questions according to what I think she’s going to ask me.”

He gave an example, “I’ll find out some information from a historian about a guy who owns a farm, whatever. And would I care about how many kids he had or what there names were? Not really. But I don’t know who she’s going to encounter. So I’ll ask the question now, ‘Did the guy have kids? How old were they? What were their names?’ So that I have that in case she says all of a sudden at the reveal taping, ‘Oh, did they have any kids? Well what were their names?’ And she says, ‘Okay, well I did run into that person.’”

Their partnership is certainly paying off. Tune in to all new episodes of Season 2 of “The Dead Files” on Friday nights at 10 p.m. EST/9 p.m. Central on the Travel Channel.