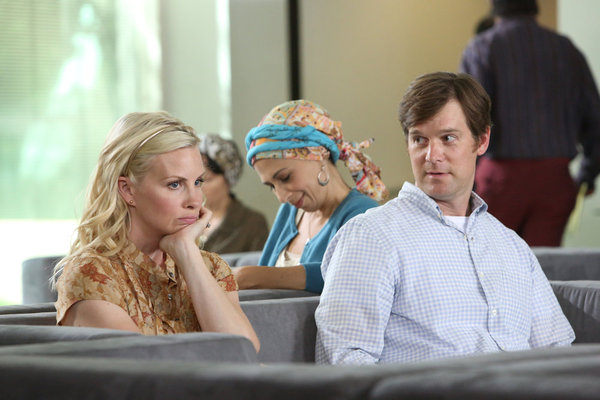 We admit, we got a little nervous when Parenthood introduced Kristina’s cancer storyline at the beginning of the season, but then we realized that they will handle this the way they have handled all the other tough topics on the show so far — a perfect balance between drama that gets you crying with a little touch of funny thrown in. It will be real, and touching and somehow comforting all in one 60 minute session every week. In a recent conference call interview Monica Potter (who plays Kristina) and the series’ creator Jason Katims (who based the storyline on his own wife) talked about the storyline.

About Adding Humor to the Cancer Plot
Jason: “One of the things that I loved about my first conversation with Monica about it, was she said, ‘Look, I really want to find the humor in the situation, too. We don't want to get to a place where I'm crying all the time and that's all I'm doing.’ And I was so happy to hear that was her take on it, because to me the whole thing with going through something like this, that I've found, was that you go through it, but as you're going through it life goes on. You have your children, getting your children to school and doing all the stuff of life still continues. And I thought that was really something that would be that was important to me in the way that we told this story.”

On Being True to the Reality of Having Cancer
Jason: “We're trying to follow the story and be as true to the experience of what it's really like as we can. And because we have actors like Peter [Krause] and Monica doing this, I feel we're able to do it, because they're, so able to find all these nuanced moments and find the reality. And the emotional moments in it, and also as I said before, find the humor in it… So we're really trying to have them follow the story as much as possible as it would really progress and it would really happen.”

On The Show’s Support of Cancer Research
Monica: “As an actor they've asked me to do a lot of things and shows or whatnot, about breast cancer and to talk about breast cancer. And for me, I'm so supportive of breast cancer awareness and especially this month. But I don't have it. I'm an actor playing a character that has it, so for me to go on a talk show and talk about my experience with breast cancer would cheapen it in a way, if you follow what I'm saying. I'm really supportive of it. I have a lot of friends and family that have gone through it. I think it's about bringing awareness to women to get checked and screened at an early age. And those points that I will be talking about here and there because of my own experience with that. But as far as like Jason said, ‘We're just now in the throws of the storyline as this month comes upon us.’ So we're handling it in a pretty delicate way as far as the press is concerned anyway.”


On How the Storyline Affects Kristina and Adam’s Relationship
Jason: “Reality starts to set in when this happens over time and the reality of [what] you're dealing with. And a lot of that has to do with not just the life threatening aspect of it, but there's also just the logistical things. There's things like missing time at work for Adam, there's all these appointments, there's decisions about which doctor you're going to, all of these things. And so we're going to continue to basically follow them through that journey… Through the actors, through Peter and Monica, they've built such a solid foundation in their relationship. And it's one of the reasons why we felt confident in being able to tell a story like this. You are in a way watching them go through something that really does test their marriage.

“It affects their relationship in that it challenges them but ultimately deepens their relationship. In the episode that was on last week, that whole issue of Adam wanting to fix things and wanting to come in and be the person who's going to make things better and fix her, and her needing for him not to be that in this case, and play a different role. It was really compelling. I personally felt that scene, and how those guys play it, was so moving to me to watch that, it felt so real… It's not the only dynamic that we'll play because there's many things that come at them and they play the various storylines according to what's happening at that moment. But that dynamic is a very interesting one. Adam is somebody that we've seen as he's assumed the role of being the go-to person or the rock of not only his nuclear family but his extended family. And I think this is challenging to Adam to be able to play a role that's slightly different for Kristina and be there to support here, but not necessarily be the person to make all the decisions they're making in terms of what they want to do medically and all that. And so it's ultimately something that deepens their connection with each other.”


On Max Running for Student Council President;
Monica: “[It’s] frustrating for her. That's the one thing [being there for Max is] her job. That's her job and she can't do it. And it was frustrating. Just the scene that we shot when Max was telling us about the speech, it was the same day that I had surgery, and it was very funny. She has calendars for everything. She knows what's happening in her kids' lives, she's helpful. She wants to be there for them… And there's this huge thing that comes along she can't be there for so she just feels completely helpless, frustrated and upset. So I love that storyline. I love that he runs for President. I think it is funny, but it's also very true and it's something that the family deals with and it's involved a lot of other family members as well, as you'll see.”


On Why Parenthood Can Tackle the Issue of Cancer
Jason: “One of the reasons why I felt we could tackle this issue is I just feel the sensibility of the show. Other shows and other movies have done cancer storylines and breast cancer storylines. What I think that we do well is to really tap into the small nuanced moments, where it feels very real, like you're living it with these characters. And the other thing that I think we're planning to do, which we've again, done with other storylines like the adoption storyline and the Asperger's storyline is, it’s not telling a story where Kristina has breast cancer in Episode 1, and in Episode 3 it's over, she's okay. This is a story that we're telling and we're committed to telling in a way that is going to be real and will be playing out more or less in real time.”