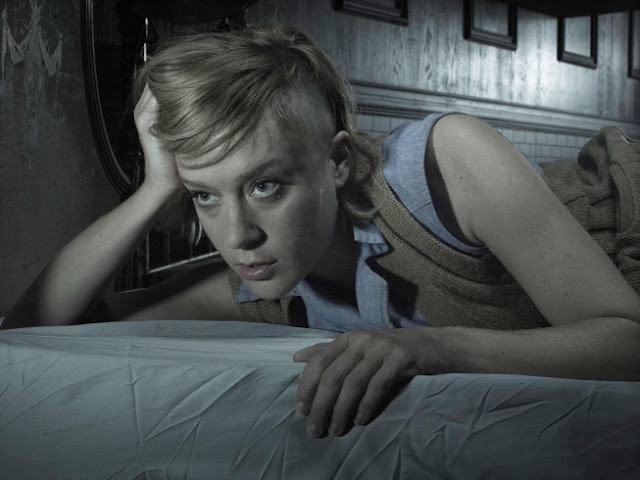 So far Season 2 of American Horror Story has not disappointed. We were worried if Ryan Murphy could bring us an equally creepy yet completely different version of the anthology series and he has delivered. This version is a bit more gory than the first but Jessica Lange is once again brilliant and we never say no to anything in which James Cromwell plays a part. As Dr. Arden, the creepy Frankenstein-ish doctor in the 1964-era mental hospital run by Jessica’s Sister Jude, he clearly is up to no good and obviously has no interest in curing any of his patients.

One such patient is Shelley, played by Chloë Sevigny (Boys Don’t Cry, Dogville, Big Love). Shelley been institutionalized because she’s a nymphomaniac. After trying to force himself on her, Dr. Arden proceeds to cut off both her legs to prevent her from escaping. Didn’t see that one coming. You really never do in an American Horror Story plot. In a recent conference call interview we talked to the actress about how she got the part, how it compares to past roles and how much she knew about the plot

Chloe said she didn’t need to audition for the part, “Thank God, because I’d never gotten the role auditioning, I’m terrible at it.” Instead she said creator and producer Ryan Murphy called her directly. “[He] said they had this guest spot and they had me in mind for it… We spoke for about an hour about the character and about the season and what he wanted to do with her. I’d never seen the show before and I had to sign on without having read any scripts. I said, ‘I already know how to make a decision considering solely off this conversation.’ So they sent me the first season and I watched that and I loved it. I was hooked right away and that’s when I signed on. Then I showed up and got my first script and that’s how I found out about the character after reading about more than what we had spoken about.”

But she only found out the arc for Shelley each week as the scripts came in. She stated, “When I read the third episode and I found out what happens to her and then what’s going to happen next and [Ryan] explained it to me. I was a little taken aback.”


In fact she found herself taken aback a lot during production. “Actually while we were shooting, I just laughed myself. I can’t believe I’m here doing this. How did I get in this situation… in an outrageous way.”

She said one of the initial challenges of shooting was knowing how far out there to get. “When you’re playing a little bit of a crazy person, you want to know that someone is taking care of you and it’s not going to make you look really bad. So I remember going to the director and saying, ‘I know the tone of the show is a strange tone. It’s big. It’s campy, and it is what it is.’ And I said, ‘I just want to make sure that I’m not going too far, so you don’t have to rein me in if I start overacting.’ Because they do really want you to push it.”

But Chloe walks that line perfectly right alongside the rest of the cast. Of course this comes as no surprise given some of her past off beat roles. She admitted, “I’ve never done anything like this before, so I don’t know if it really compares.  When you see what happens the next few weeks, it becomes a whole other thing. It was pretty new for me and that’s what made it so exciting and fun to do. I always want to try new things.”

Obviously couldn’t reveal much about what becomes of Shelley (and frankly we don’t want to know, we’d rather watch it unfold). But she did divulge that the worst is yet to come for the character and the evil doctor has very dark plans in store for her resulting in the need for four hours of prosthetic makeup.

One thing that is not fake is Shelley’s unusual hairstyle. In the first episode when Sister Jude shaves her head, Chloe opted not to use a hairpiece. Instead she let Jessica Lange take a razor to her. She noted, “It was better than going in at 4 a.m. instead of six to have them put a piece on, so I just learned to live with it. I had the haircut actually when I was younger, like 20 or something, and it really worked. Now that I’m older, I found it not to be working quite so much.”