Daniel Rosa Gets a Second Chance on The Voice 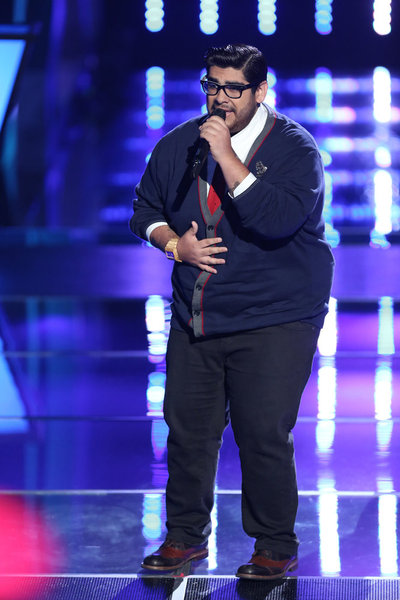 Second chances are few and far between in life and in reality TV. But Daniel Rosa, a lucky contestant from last season of The Voice got his lucky break upon his return.  This time the judge’s took notice of the 20-year-olds smoky rendition of Gotye’s “Somebody That I Used to Know” — a much more successful choice than his first blind audition’s “Animal” by Neon Trees.

Clearly he listened to what the judge’s had told him before — build your confidence. It’s no wonder he was nervous. As Daniel recounted in a recent conference call interview, “The first time I ever held a microphone, in my entire life singing, was the blind auditions. I’ve never held a microphone. And it is hard for me to break out of the choir-like stance and walking around is very different for me.”

So he listened to the words of wisdom doled out by The Voice's brain trust — Blake Shelton, Cee Lo Green, Christina Aguilera and Adam Levine. He started performing and hosting shows in his native Riverside, California.

Both Blake and Cee Lo took notice when he came back to the reality show. They pushed their buttons and turned their chairs around. When it came time to make his choice, Daniel decided to join Team Cee Lo.

As Daniel explained, “The whole reason why I picked Cee Lo in the first place was because I knew that Blake Shelton presses buttons too, but I knew that Cee Lo Green was like huge crazy. He likes to do the big things and I’m not used to that. So I was hoping that he would help me out with that, and I just really took that into consideration when I picked him.”

The choice has paid off so far. Daniel won his battle round against Alexis Marceaux. And he gives a nod to his mentor for that, “He’s definitely helped me out like with stage presence. He’s given me like a few pointers. So it’s been pretty cool.”

It’s all helped with that pesky self-esteem issue that was plaguing Daniel, too. He acknowledged, “Every time I get on the stage and every time I start to perform, my confidence has been getting better. So I was just feeling about the show, if anything I’m learning more about myself. So I don’t know if the nerves will ever leave, but I do know that they’re getting better.”

His plan moving forward was simple, “My strategy is just to bring the confidence. I really need to do that, and it’s time that I just need to pull myself together. I’m not like an extremely emotional person, I’m not crying every single day of my life.”

Instead he finds strength in his spirituality and his loved ones. Daniel revealed, “What I do is pray. I can’t go through it alone. My family was there for the last performance. But for the most part, we’re in the hotel rooms with just our roommate. And that’s the thing that’s really helped me through it.”

Unfortunately all the hard work and talent wasn’t enough for Daniel. He lost to MacKenzie Bourg during their “Call Me Maybe” Battle Round face off.

Tune in to The Voice on Monday and Tuesday nights at 8 p.m. EST/7 p.m. Central on NBC.