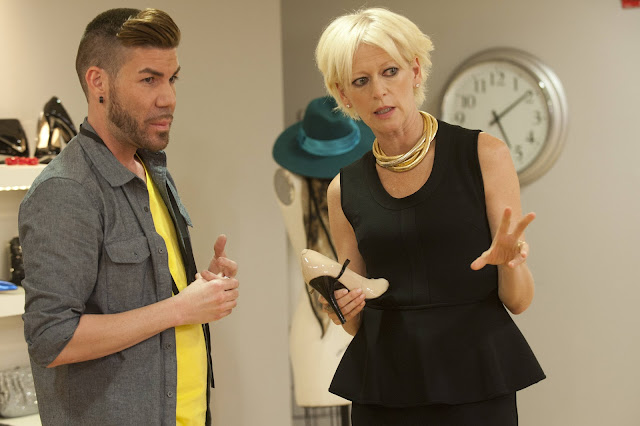 Project Runway All Stars is back for a new season and we're totally excited to find out "what happened to Andrae" when Season 2 competitor Andrae Gonzalo returns along with twelve other past designers. Some of our favorites include Anthony, Uli, Emilio and Althea. Also returning in the Tim Gunn role is mentor Joanna Coles. In a recent conference all interview Joanna talked about the new season and what makes a successful designer.

Joanna explained what she thinks is the difference between the designers that stand out and those that don't. "It takes an element of bravery and it takes the ability to be able to surprise. And it also takes the ability to make sure that every garment is carrying your signature in it. So everything has to be cohesive and it has to feel like something you've done."

In her role as mentor she has never felt the need to be like Tim Gunn. She noted, "Tim is such a one off. It would be a hiding to nothing to try to imitate him. I am on the TV show like I am in real life. I'm very direct. I'm very straight forward. I say pretty much what I think, as I think Tim does actually, but we're very different... and I think I've had sex more recently than Tim."

In the workroom she counsels each designer based on their personalities and desires. She stated, "I try to be flexible depending on what I think people need. There were some people in the room who really want another voice to bounce things off and to try an idea out by saying it out loud and seeing what someone else's reaction was. There were other people that actually needed you to talk about the shape and the silhouette and the fabric and was this going to work. There was a room full of very creative people and some were better actual designers than others. So there was a range of advice needed in the room."


She said she even gets thank you notes from the designers after an episodes shoots saying they appreciate her insight and help. She added, "It's an incredibly rewarding process."

On all the seasons of Project Runway, it seems to be an age old battle about which is more important creativity or execution. Joanna could not choose one over the other. "It depends on the challenge. In some of the challenges you just need to be able to execute really well, especially for the more commercial challenges when you know the item is going to be available on sale in the American high street. There are certain challenges… which was all about creativity. There was one designer that designed a two piece item and the top was one of the most creative things I'd ever seen on Project Runway and the bottom part of it was a compete and absolute disaster. It was brilliant creativity and absolutely terrible follow through. It's a combination depending the challenge."

But it is a blend of design and business sense that makes a great designer in Joanna's opinion. "It's the perfect ability to blend creativity and commerce and when you look at the big designers, like Marc Jacobs, like Donna Karan, like Michael Kors, like  Diane von Furstenberg… you see their ability to do that. Also the ability to understand how women want to feel when they're wearing clothes… It's that ability to understand the transformation you feel when you put on an item that's really fabulous and the ability of a designer to think really creatively and also to understand what will sell."