Howie Mandel Talks About ‘Take It All’ 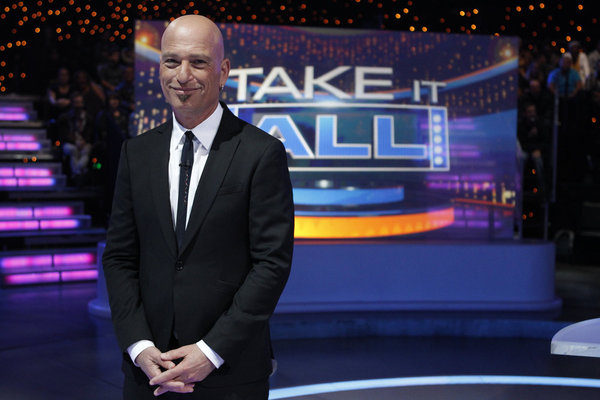 Howie Mandel is hoping for another shot at game show magic with a holiday themed special called Take It All. Who doesn’t love a good old fashioned yankee swap? It’s the best part of family holiday get togethers, isn’t it? We all love trying to steal the iPad your uncle generously brought while praying you don’t get stuck with the musical toilet paper holder put into play by your wisecracking cousin. It's the highlight of the holiday. And now Howie has brought the idea of the white elephant to prime time. But in this version there are no dud prizes. At stake is hundreds of thousands of dollars worth of merchandise like hover crafts, expensive cars and exotic vacations.

On Basing the Show on a Yankee Swap
“Having been to a party where people played Yankee Swap or White Elephant or Secret Santa, you realize the reason that we’re playing it in people’s homes is because it’s a great form of entertainment, and it’s a great interactive, social, fun game… I’m Jewish, so we didn’t play Secret Santa but when I went to work and you worked at companies, and we had holiday parties and things like that, I had seen it. So I was fascinated by it. It was always the highlight of every party. And especially when people became competitive and upset and angry, I mean it was so much fun to watch people steal from another person. And it always tickled my fancy.”

On the Level of Prizes on Take It All
“There are no duds. Well, the only dud, if you want to call it a dud, is you end up out. And I say that a couple times on the show. In one of the beginning rounds when the amounts are lower, you could end up where there’s a range from $15,000 to $100,000 in one round, and end if you end up holding the $15,000 prize, which for all intents and purposes is a really nice valuable gift, that could end up being the dud because that could send you home. You have to give that back. You give back everything you’ve accumulated up to that point… That being said, prizes are like characters in themselves. You will see things that you haven’t seen on any other show. Things like hovercrafts and submarines and jet packs, and things like you’ve never seen before, so they’re all amazing.”

On Not Knowing Anything About the Prizes or the Players
“This is why I wanted to play it and maybe it’s not like any other host, I’ve never gone into the prize room. So I said, ‘I want to be blown away by these prizes too,’ so I don’t know what’s coming up; number one. So as the game goes on and a hovercraft appears, I have no idea. I want to guess. I want to have the fun. Is the hovercraft worth more than the Mercedes? Is it worth more than a jet pack? I don’t know, so I’m having fun with that. And the other thing is, I know nothing about the contestants until I ask the questions. So, they’re obviously, as there are in every show, a casting process, as far as people showing up and applying to be on the show, and they fill out applications, I don’t know anything about it. So, you may think you know something. I don’t want to know something. I don’t want to know what their background is or how they play or what their strategy is. We learn and it unfolds in front of you.”


On Maintaining a Distance from the Players
“First and foremost I’m a human being and I’m a father and I’m a husband. You can tell that I root for people and you can tell that I care, and it’s really hard. It’s the hardest thing is to maintain, and I guess that’s what they pay you for, to maintain my professionalism when I see, in my mind, just like you the viewer, you know I can go, ‘Oh, no, no, no, no, this is bad move. This is a bad move,’ but I’m not allowed to say that. And I can think it, but I can’t tell you I’m thinking it because that may sway you. And then again, I could be wrong. So yes, I am very involved. I can’t totally remove myself from it. And I hope that I maintain a professional stance as the host and I’ve seen some parts of it and I think I do a fantastic job.”

On the Most Challenging Part of Hosting Take It All
“The most challenging is to hold my emotions in check and my knee-jerk reaction in check when I believe that the person standing within arm’s length of me is making grave mistake that will impact the outcome of the game and eventually impact the rest of their life. I don’t have delusions of grandeur, but the truth is if somebody walks out of a room with half a million dollars more than they walked in, I think their life just changes drastically. Sometimes it’s very obvious to me that this decision that you’re making is not really the best decision. You may want to take another minute and think about it, but I can’t do that. I can’t sway them. So that’s really hard, because as I said, first and foremost, I’m a human being and a father and a husband and you just want to go, ‘Wait, wait, this is a game and you’ve got a chance here to change your life.’ Everybody has a story, everybody has a situation and everybody wants a better life for themselves. And when you show up on one of these games, this is truly an opportunity publicly to really change your life.”

On What He’s Learned from Take It All
“I’ve learned that you cannot judge a book by its cover. I learned that I’m fascinated with the human condition. I’ve learned that you put people in different environments and they probably don’t even know what they’re going to do. What happens is they get up there and there’s hundreds of thousands of dollars cash in front of them, diamonds, boats, gifts and real estate, and you watch their eyes glaze over and become a different person… All I try to do as the host is just direct the traffic and hope that I keep them as clear as possible and as focused as possible, so that they can manipulate whatever plan they have of attack in the clearest possible way.”

On If the Show Will Go Beyond the Five Nights
“That’s a question for NBC. It’s not a question for me… The last time I was involved with an event of this magnitude in this way was Deal or No Deal. When I was presented with Deal or No Deal they said, ‘We’re going to give you five nights in a row on a network and we truly believe in this. We think it’s a fun holiday event.’ And that fun holiday event turned into 500 episodes. So I would love that, but I take each take as it comes… I just came in the room and showed them a game. I had no idea where it would go from there. And the fact that it’s seven hours of television now and I’m thrilled. And if becomes more, I’ll be even more thrilled.”