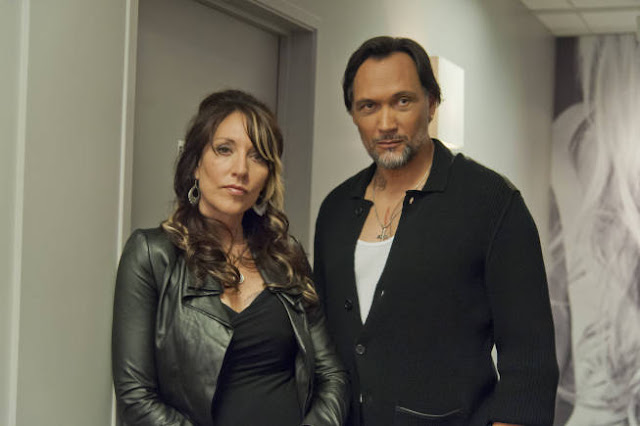 In Season 5 on Sons of Anarchy, Jimmy Smits joined the cast as Nero Padilla, the Mexican pimp known as the “companionator.” He starts a business partnership with Jax (Charlie Hunnam) and sparks a romantic one with Gemma (Katey Sagal). A longtime fan of the show created by Sagal’s husband, Kurt Sutter, Jimmy was thrilled to join the cast. He now can add Sons to his long list of credits, which include L.A. Law, Pee Wee’s Playhouse, NYPD Blue, West Wing and Star Wars. In a recent conference call interview Jimmy talked about getting the part, riding motorcycles and light sabers.

On Getting Cast in Sons of Anarchy
“Paris Barclay, who is an executive and does a lot of the directing of a lot of the Sons episodes, is somebody that I know from NYPD Blue… It so happened last year that the DGA, the Director’s Guild of America, was doing a tribute for him, and because of that they invited a number of different people from all of the wonderful shows that he’s participated in — In Treatment that he was involved with and Blue and of course Sons… [Longtime partner] Wanda [De Jesus] and myself and Katie and Kurt, we spent a couple of minutes talking. In a way it was out of that that the call came from Kurt that he wanted to know if I would sit down with him and just explore the possibility of an idea for an arc. At that time, he was formulating what he was going to do for the season and what he necessitated in terms of the spokes of the wheel of the show. So we had two or three lunch meetings. I went to his office, took me around to the set, and just started vibing about what the show needed and a character that he was interested in exploring. That’s the way it all started. That first script wasn’t really written yet, but he had it in his head. So basically, that’s how it happened.”

On Being a Fan of SOA
“We were fans of the show. It does have a really loyal, core base following that are very passionate about the show. It’s not just people that are into motorcycles. It’s this whole outlaw, very passionate following.  It’s an industry darling. A lot of people in our business are into the show… Wanda, she was a die-hard fan of the show probably because the fact that Kurt, besides the grittiness of the show, he writes very strong women characters. So when that call came in and Kurt wanted to talk, she was like, ‘You’ve got to do this.  You’ve got to do this. You’ve seen the show, but you don’t know what happened.’ So we started watching that third season, which is when… they did the whole Irish storyline, I think the show just jumped into another gear it just struck me that the show is very, very cinematic in a way.  They’re able to do these wonderful things.”


On Sending a Message to the SOA Fans
“Keep watching. We’re so very, very happy that this season that loyal fan base that has been around has grown exponentially. To hear all of the wonderful things that we have around the table when we’re reading new scripts or out there in the grittiness of the motorcycle deserts riding around, when the guys are riding around, that fan base has increased and the numbers have increased exponentially. The show has grown even more popular, so everybody’s really happy with that. With that comes a responsibility not only to that loyal fan base, but to the new folks that are around that are watching it to keep on doing it. So everybody’s conscious of we’ve got to keep upping the ante and keep raising the bar.”

On Comparing Bikes to Light Sabers
“When I first had my first conversation with George [Lucas]… The conversation was like, ‘I really like your work, and I’ve watched you before, and I would like you to join our family. But this conversation is not going to continue unless you are cool with the fact that there will not be a lightsaber involved in the conversation.’ So that’s the way we started that."

"So similarly… [when] I got this call about Kurt wants to have a sit-down with you… So they scheduled a sit-down for a couple of weeks… So the first thing I did was I started doing my motorcycle research, and I got my motorcycle license. So I’m riding with my stand-in, who’s been my stand-in for 20 years, and I’m getting myself all geared up for this, and we have this talk with Kurt. Much the same way as the Lucas thing he was like, ‘Okay, so before we continue this conversation, know that we’re not talking about bikes.’ And I’m like, ‘Oh no. I just got my license.’ But who knows, a Vespa might be in Nero’s future. Who knows? To be honest about this thing, I knew that bikes weren’t going to be involved with regards to this character. But in my heart, I’ve been riding and that’s just the actor in me. If I’m going to be in a Western — even if I’m going to be riding the stagecoach wagon — I’m going to learn about horses just in case somebody says one day, ‘You know, maybe if Nero got on one of the bikes that fell,’ and then I’m going, ‘Duh. Duh. I can’t ride. I don’t know how to ride.’ So I’m ready. If it happens, I’m ready — even for the Vespa I’ll be ready.”

On The SOA Cast and Crew
“There was a comfort level there because of Paris and [co-star] Ron [Perlman], and I’m very happy that it’s all worked out the way it has. I love those guys.  hey really are a very, very, very tight family. Without going into a lot of detail, that whole thing that happened with Opie’s character… It was not only what was filmed, but it was very emotional for that group during the read-throughs and those couple of weeks when those decisions were made. They’re a very, very tight group that have dynamics, like every family, and I’m just very proud to have worked on it this season and given a little contribution there.”


Michael Marisi Ornstein from Sons of Anarchy is a Real Artist